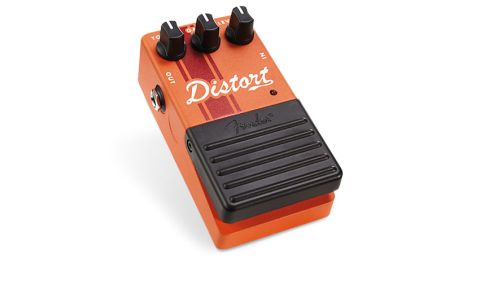 Decent distortion at a good price but be wary of the tone knob.

The Fender Competition series brings good value and unobtrusive designs to the firm's (once limited) effects range. Here we check out the distortion pedal.

Fender isn't really known for its effects pedals. Sure, there have been some in the past, such as the Blender fuzz, and there were a bunch of re-issues that we reviewed in 2008, but they were all one-offs and nothing like this new homogenous range.

Where previous Fender pedals have eaten up floor space, the Competition Series is 'board- friendly with a similar footprint to Boss compacts, and competitively priced - under £50 at many retailers.

With a different take on the dirt thing than (new sister pedal) the Drive, the orange-coloured Distort offers a similar array of tone, gain and level controls but is capable of being a more vicious beast.

You can get a fairly natural, if dirty, boost by whacking up the level and dialling in a minimum amount of gain, but start turning up the gain and an aggressive crunch leads on to a powerful cranked rock amp distortion with a fully clockwise gain knob.

Whatever amount of distortion you wish to dial in, the tone control can exert a massive influence, but be aware that it offers EQ that can get very nasty indeed, bringing in a top-end fizz that could shred your ears - too much for the purists perhaps, but just the job if you want to scare your audience.

This is not one of those over the top pedals that has loads of gain to spare, but it will give you a nice measured amount of distortion, from overdrive to metal.