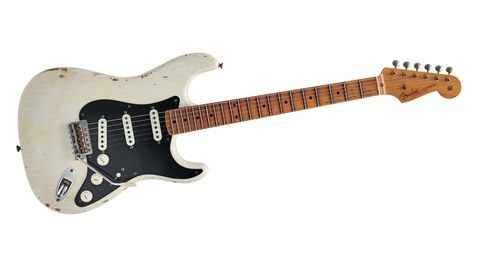 If you're an old-guitar addict, this is a new fix.

The Ancho Poblano Strat is, effectively, a vehicle for the new-recipe Custom Shop Ancho Poblano hand-wound single-coil pickups that, obviously, aim to add a little more 'spice' to your sound. But it's not the only new idea here.

Up to this year, the Time Machine ageing consisted of various levels, in order of distress: the clean NOS (New Old Stock), the very mild Closet Classic, the bashed-up a bit Relic, and the very bashed up Heavy and Extreme Relics.

New this year is the Journeyman Relic, which sits between the Closet Classic and Relic, and is classed as 'used but not abused'. Here, the usually opaque White Blonde finish is classed as 'Shattered Journeyman Relic' with dings around the top and bottom edges and on the ridge of the rear belly cut. It's far from excessive, though.

But as big a talking point here is the neck: it's huge! With it's '51 baseball bat profile - so wrong, vintage buffs - it's clearly aping an early pre-Strat Tele neck, with big full shoulder and subtle flattening to the back as you move upwards.

While the neck back is beautifully worn and satin feeling, the actual nitro lacquer on the head and around the heel is more glossed. The face looks like an old Strat that's been re-fretted with big jumbo frets and re-lacquered because of the maple face, so, again, it's glossed.

To imagine its history, the re-fret was clearly done a few years ago because there's visible wear in the lower positions and a darker line either side of the frets, which looks a little odd in terms of authenticity.

The rear vibrato cover plate has long since been removed and lost (actually, it's in the case), while the stratchplate is a single-ply 'Bakelite' - again a Tele, not Strat, reference. The nickel hardware of the vibrato and tuners is very authentically aged. The brighter, less aged chrome of the jack dish is quite authentic, too, because chrome-plating is a lot harder than nickel.

Aside from the new pickups, there are no tricks in the electronics with the two tones effecting neck and middle (tone one) and bridge (tone two) - not original spec but very useful.

Big and beefy is an apt description of the AP - and that's just the neck. On a mainstream guitar it'd be laughable, but here the engagement brings a smile to our face: a sense of power that even just played unplugged makes it special.

Now, if you think Strats aren't always the 'biggest' sounding guitars you've ever experienced, this one might change your opinion. The graduation from dark (neck) though bright (bridge) and the near perfectly balanced middle pickup is really noticeable.

We've all had Strats that have a great neck pickup sound, for example, and then are let down by a weedy, scything bridge pickup. Yes, there's plenty of cut here, of course - especially picking close to the bridge, it's an almost Tele-like honk - but as you move into the rockier side of roots, with some crunchy gain, there's a sparkle with some power that you don't always hear from Fender's finest. Tough Texas blues voices fall out of the guitar.

It's not actually over-hot - there's slightly less apparent output compared with our Texas Special-equipped Strat, and also slightly less upper mid spike, too. What we get, though, is an open classic Fender voice but with a subtle fullness and richness that's especially noticeable on the neck and middle pickup.

Does this change the world sonically? No, but that's the thing, that balance and fullness of the Ancho Poblano pickups shade the tones we love and perhaps take us, as players, to a more comfortable or creative zone.

Then there's the playability: the bonkers neck on this Strat will be missed - this writer's other Fenders now feel like ukuleles.