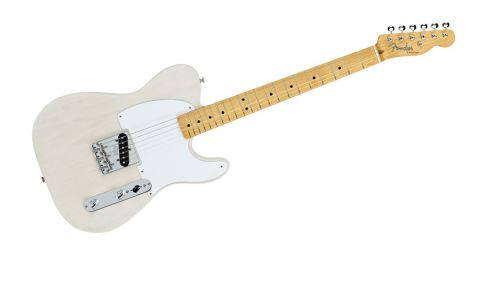 Fender's single-pickup Esquire pre-dated the Gibson Les Paul Junior, and indeed the Broadcaster/Telecaster, on its introduction in 1950.

Within a year, it had dropped behind the Broadcaster - now called Telecaster - despite being exactly the same guitar without a neck pickup and different wiring (although a cavity for the neck pickup was, from this point, always included). It meant the Esquire cost, in 1951, $40 less than the Telecaster, at $149.50.

The polar opposite to the electrified acoustic archtop jazzbox, Fender's Esquire would have cut quite a dash back in the day. 64 years on, it remains the definition of minimalism. This Classic Series version sticks to mid 50s vintage spec where possible: uncontoured ash body (with additional routing for a neck pickup) under semi-translucent blonde finish, one-piece maple neck/fingerboard with a not too perma-tan tint and, of course, a small-radius fingerboard face and small frets. At this price there's no nitrocellulose: the body is coated in polyester, the neck in polyurethane.

The tray bridge goes with three steel-rod saddles, the late 1954 to mid '58 change that followed the earlier brass saddles. For its solitary single-coil pickup, however, we have the usual two-pickup Tele-style tone, volume and three-way lever switch. The switch, obviously, always voices the single pickup but with a different configuration of the electronics and controls.

It's not the lightest Tele we've played, but the neck shape and feel makes up for that - a deep C with that left-hand wraparound comfort of a small radius fingerboard. Set-up and intonation as supplied was fine, and although intonation is more often than not a compromise with just the three bridge saddles, it really wasn't off: if anything, slightly flat, which to our ears is always preferable.

With a Gibson '57 LP Junior and Fender '69 Tele as reference instruments, we plugged in the Esquire. Where's our sound gone? Whereas we had a ballsy, crunchy Brit-rock (first time around!) sound from the Junior and only a slightly cleaner tone from the Tele, this sounds like we've taken a gain stage out of our signal chain - it really is a little weedy.

There's a lot of high, piercing 'modern' Tele-ness to the tone in the 'bridge' position; in 'middle' position we can at least use the tone control to tame those highs a bit, and increasing the amp's gain there's a superb sizzle and raunch - we're getting there!

However, in 'neck' position, it sounds like someone has turned a darkly voiced tone control all the way off. To our ears, this needs a more powerful single-coil; as it is, it needs quite a lot of outboard help.

Is the single-pickup guitar valid in 2014? Probably, to a certain player, more so than it's ever been. There's definitely something that engages the primitive essence of rock 'n' roll when you strap one on.

The Esquire is the original electric plank in its most basic form. Some might say it's the coolest looking electric guitar ever, but style aside, while this one might not match the darker power of some 50s Esquires and Telecasters that have passed though our hands, there's little doubt it can still nail anything from original rock 'n' roll through country, soul and onwards to punk.