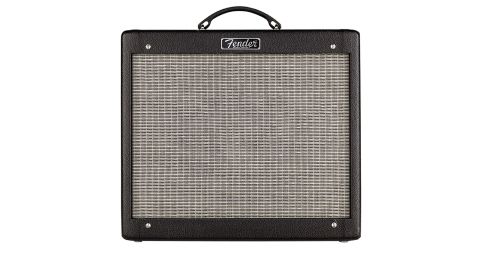 An oldie but a goodie, this compact combo may be basic, but the tones it produces never fail to impress.

Since its introduction in 1995, Fender's Blues Junior has become one of the world's most popular amps, but along the way it's also become one of the most modded, with reams of forums discussing ways to 'improve' the compact combo.

Accordingly, The Big F has updated the format over the years, and the Blues Junior III, launched in 2010, features a number of additions that have gone down well.

Aside from the new Fender Special Design 50-watt 'Lightning Bolt' speaker, produced by Eminence, the III's other big change is the implementation of the 'sparkle mod', which involves removing a couple of capacitors on the circuit board, and results in a brighter tone than previous incarnations.

Elsewhere, there are minor alterations, including rattle-reducing shock absorbers for the EL84 power valves and a more comfortable 'dog bone' handle. You won't need much help carrying the Blues Junior, though - it weighs in at a mere 14kg, making it one of the lightest giggable valve combos on the market.

Fundamentally, the Blues Junior's 'keep it simple' ethos remains: there's one channel, with a fat boost for rounder bottom-end and increased drive, volume and master volume controls, plus a three- band EQ and typically splashy Fender reverb. And that's about your lot: there's not even a standby switch!

Build quality could be better, too - at least on our review combo, which had a rather loose back panel, although a quick tightening of the screws helped to secure it for the most part.

The Blues Junior keeps proceedings as simple as possible, but when the clean channel's this good, who cares?

The Junior's Fender-meets-Vox sparkling high-end and fat midrange make both single coils and humbuckers positively sing. You'll want to take it easy on the spring reverb, though: any more than two or three on the dial and your guitar will be drowning in it.

However, it does help to take away any sensation of 'boxiness' from the amp; this being a small - and light - combo, it doesn't quite have the projection or bass response of, say, a Vox AC15. Of course, those factors are far less evident in the context of a full band and a mic'd-up cab.

The fat switch also helps to make the III sound bigger than it is, beefing up the bottom-end and boosting the preamp along the way. With humbuckers, the amp starts to overdrive with the volume at five, and even at low volumes it sounds saturated and chunky.

However, keep the preamp volume low, and you'll definitely want to run your drive pedals into the front-end; they sound smooth and responsive through such a bright, clear clean channel, and make this our favourite pedal platform of the lot - even if there might not be quite enough headroom to keep the amp crystal-clear at gig volume.

In summary, this latest Blues Junior is by no means lacking in performance. What it lacks in versatility, it makes up for in sound, and while it doesn't sound as big as other 1x12s, its no-brainer operation and light weight make it a combo you wouldn't mind loading into the car after a gig.