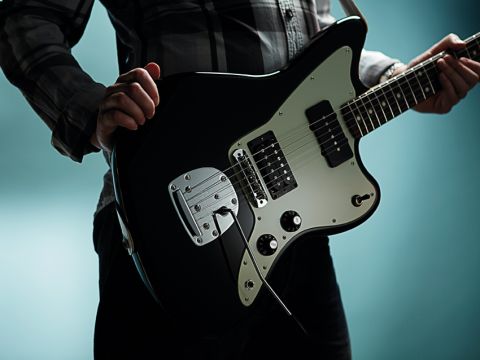 Pimped it may be, but the quirks of the original Jazzmaster remain. It's up to you to decide if that's good news or bad…

By the early 1970s, the chisels were out and humbuckers were in, no matter what you played. Fender got the message and released the twin humbucker-equipped Tele Deluxe and Thinline in 1972.

It's really only the control knobs that tip you off that this Jazzmaster HS is part of the Blacktop Series. This is because the pickup layout is different to the other three guitars in the range.

'HS' equals humbucker and single-coil, so you get an open-coil humbucker paired with a classic Jazzmaster neck pickup. Both units are (Seymour) Duncan Designed.

First unleashed in 1958, the original Jazzmaster had the longer 648mm (25.5-inch) scale length of the Tele and Strat, but shared the same floating vibrato with its Jaguar sibling.

Oddly, Fender has chosen to include this temperamental unit on the Blacktop Jazzmaster and almost immediately we begin to experience the familiar rattles and squeaks for which it's notorious.

We also notice that the bridge humbucker alignment is a bit off, with the high E string not quite centred on its polepieces. However, a quick run through our amp confirms that, sonically at least, the alignment issue doesn't cause any discernible loss of signal or string balance.

Our Blacktop Jazzmaster has superb playability thanks to the modern spec medium jumbo frets and fingerboard radius. The simplified control layout makes it a bit more user friendly than the original vintage model.

The Jazzmaster HS is responsible for the only departure from the £539.99 asking price of the Blacktop range, with the three-colour sunburst version coming in at £574.99, which is still hardly a fortune.

The Jazzmaster offers some cool tones, too. Thanks to that big old vibrato, the guitar almost has a hollowbody quality to its tonal makeup. You'll have to try it to understand what we mean.

The Duncan Designed bridge humbucker sounds brighter than the bridge units on the other guitars. Ironically, given the whole high-octane nature of this series, the neck single-coil on the Jazzmaster is actually the guitar's best setting.

A clean tone, some reverb, jazzy chords and a gentle wobble of the vibrato arm and you'll be in '50s heaven. Whack on some distortion and fans of Sonic Youth and Nirvana will be just as happy.

Some will see the Blacktop Series as a cynical marketing ploy designed to squeeze a bit more juice out of some very well-established designs.

This is a good guitar in its own right, but it just doesn't feel like it's part of the Blacktop series to us.

For starters, the usual problems inherent with its bridge and vibrato put us off it a bit and sent us scurrying back to the other three guitars. You really have to try the Jazzmaster for yourself to form your own opinion on it.