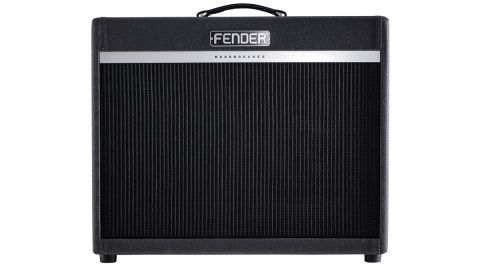 As a new alternative to existing 'Brit sound' choices, the Bassbreaker range has a lot going for it.

Time never stands still, and with amps such as Fender's Blues Junior and DeVille now regarded as 'vintage' by many younger players, it's worth remembering that 2016 actually marks 70 years since the first Fender 'Woody' amps.

Fender has chosen to kick off the new year with a rare event: a brand new amplification range that takes some of its inspiration from classic British amps of the 1960s, which were in turn 'inspired' by classic Fender designs from the late 1950s, such as the infamous 5F6A Bassman and 5E3 tweed Deluxe.

The amps are designed with the current trend for outboard pedals in mind and have some interesting boutique-inspired features, which vary on each model.

The chassis is similar for all of them: a hefty open-ended steel box made of two angle sections joined by small machine screws. The internals are PCB-based, with two main boards for preamp and power amp supporting all the front panel components and valve bases, joined bya lot of wires and ribbon cables.

While everything is densely packed in, the component and wiring standard is very good and our Bassbreakers certainly have the typical Fender vibe of style blended with tough reliability - first and foremost tools for working players.

The 18/30, which is only available as a 2x12 combo, has a deceptively simple two-channel preamp feeding a quartet of EL84 output valves. Channel 1 has controls for volume, bass, mid and treble, and uses all four EL84s for an output of around 30 watts.

Channel 2 has a simple volume and tone control arrangement, and uses one pair of EL84s, knocking the power down to 18 watts. The 18/30's stripped-down vintage design means that many of the features we take for granted on modern amps are missing: there are no tone-altering push- pull switches or effects loops, for example.

The rear panel has sockets for extension cabinets together with an impedance switch, a post-output-stage line out and a jack for the single-button footswitch that toggles channels. Apart from that, what you see is pretty much what you get.

The amp fires up quietly, with no audible mains hum and very little hiss. We tried it with a selection of guitars, including a PAF-powered Les Paul Standard, an old Strat fitted with Duncan Alnico Pro II's and an Ibanez archtop.

The 18/30's full-featured Channel 1 is supposed to sound like a mid-60s 'blackface', while the stripped- down Channel 2 is based on an earlier '61 'brownface' Deluxe, an evolution of the earlier tweed amp.

Despite EL84s and Celestions instead of 6V6s and Jensens, the 18/30 certainly has something of those amp characteristics, with a bright airy treble and full bass on Channel 1, which sounds superb with a touch of chorus and reverb from a small digital multi-effects.

Channel 2 is warmer and more rounded, with a distinct bite at higher volume levels, due to the reduced headroom. Whether it was coincidence or not, we feel this channel is better suited to analogue effects.

Teamed up with an ancient bucket-brigade delay and a modern high-end drive pedal, the result is a big, punchy and very dynamic Billy Gibbons-approved distortion, just right for tearing into early ZZ Top.

Both volume controls need to be up around the halfway mark for the amp to work properly, and at this point the 18/30 easily matches most drummers, so it's not really suited for home use.

We've enjoyed Fender's Pawn Shop Special experiments, but it's brave of Fender to step so far out of its territory with a whole new range that doesn't use the traditional output valves found in most Fender circuits.

Aimed at players of all levels, from home recordist to weekend warrior to seasoned pro, this new range is built to stand up to professional use and quirky enough to appeal to boutique fans, as well as being in step with the current pedalboard trend.