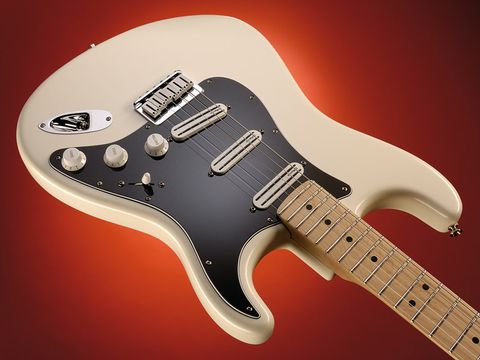 Distinct looks combine with great tone to offer a seriously versatile package for the price.

Throughout his career, Billy Corgan has utilised an array of gear including a modded Marshall JCM800, various Big Muffs, a rare original Fender Blender pedal and a seventies Fender Stratocaster loaded with Lace Sensor pickups that he bought from Smashing Pumpkins drummer Jimmy Chamberlain in 1989.

This new signature guitar is a long-awaited replacement for that "1973-ish-era" Strat to which Corgan was so attached. It was stolen at a 1991 club show, and ever since he's struggled to find a guitar that he feels truly comfortable with for everyday use.

Fender's new interpretation seems a mixed bag of old looks, modern finishes and modern high-output electronics. On first inspection the overall fit and finish of the guitar is excellent - Fender is doing a fab job with its Artist Series instruments of late.

The guitar borrows heavily from the well-regarded, USA-made Highway One series, with the same thinly applied satin nitrocellulose finish. This not only has a nice haze, giving the blonde finish a pearl-like effect, it also feels great and smells fantastic, honestly!

It also follows the Highway One with the same seventies headstock complete with large Fender and bold Stratocaster logos. The contrasting black-faced scratchplate is a well executed and distinctive look, although the white plastic knobs and pickup covers may divide opinion.

Electronically we're dealing with relatively familiar Fender principles: three pickups - albeit single-coil-sized humbuckers - a five-way selector switch, a volume and two tones. One of these tone pots affects the bridge pickup, and the other controls the neck.

DiMarzio came up with this pickup combination after much testing. "I've been very satisfied with the low noise floor of the DiMarzio pickups. The high-gain application and the versatility," Corgan explains. The bridge and neck 'buckers are wound to Billy's specification, while the centre unit is a standard Chopper model.

The maple neck is slick and smooth-feeling, which you don't always get with this kind of guitar. And to cap it off, the jumbo frets are a great addition for playability and serve to make this guitar almost effortless to play.

Partly due to its thin finish and string-through, hard-tail bridge, the Billy Corgan Stratocaster provides masses of high-end zing and crispness when unamplified. The alder body also serves to provide a well-rounded low-end so there's little danger of this guitar sounding too bright.

Loaded with three DiMarzio humbuckers this was never going to be your typical vintage Strat sound, and this becomes evident upon striking the first chord. Through a clean Marshall amp and switching to the first-position, the bridge pickup gives you a real sensation of push. This means that chords and individual notes fall from the guitar with consummate ease, while big, glassy rhythm tones really soar when you let loose. But as with its acoustic tone, the guitar has plenty of low-end resonance to mellow out the brightness.

What is quite surprising is that the guitar's famous character is retained overall. You know instinctively that this is a Strat you're playing, a hot-rodded one, maybe, but definitely a characterful instrument.

Utilising the tone control on the bridge-pickup works well for bringing the whole thing down, making it less edgy-sounding. This means that recreating some of the more mellow clean parts from famous Smashing Pumpkins songs is no problem. For instance, when we tried playing 1979, it sounded dead-on with the tone rolled down to around seven.

With some heavier gain, the bridge pickup starts to reveal an interesting versatility, producing a mid-gain grunge to indie-rock tone. Here it delivers clarity and punch exceptionally well while always sounding edgy.

It's almost like you can't trust it not to fully rock-out, which we hasten to add is massively rewarding. Push the preamp gain up to max and smooth out the mids and this guitar could be on stage with the likes of Iron Maiden, easily producing piercing lead tones and rumbling high-gain rhythms.

Subtracting a little gain and switching to the second or third positions activates DiMarzio's Chopper pickup, which on the whole is voiced slightly differently to the Billy Corgan customs. It has more snap and is much more direct from a 'feel' point of view, great for funky rhythms and biting lead playing. With lots of fuzzy distortion it's also great for grunge chugging.

Finally the neck position; normally an old-school Strat tone would be right on the money, but this can in some circumstances be restrictive. The power, clarity and honky-ness that the neck DiMarzio delivers is highly enjoyable and you can adapt the sound to almost any style of music.

Stevie Ray Vaughan, classic David Gilmour and Hendrix can all be found with a bit of experimentation, along with its staple diet of American grunge-rock riffs and indie rhythms that make up a large part of the Smashing Pumpkins' sound.

Fundamentally, this is a very good guitar. The finish is great and the playability excellent. It feels well balanced and can cover such a wide range of musical styles that it had this reviewer wondering what it could pull off next.

An American Standard Stratocaster comes in at £879, but this is slightly under that price, which frankly is great value for money, even taking into consideration that it doesn't have a vibrato. For anyone looking for a 'higher-gain' Strat this is one of the best sub-£1,000 modern-style Stratocasters that we've played.