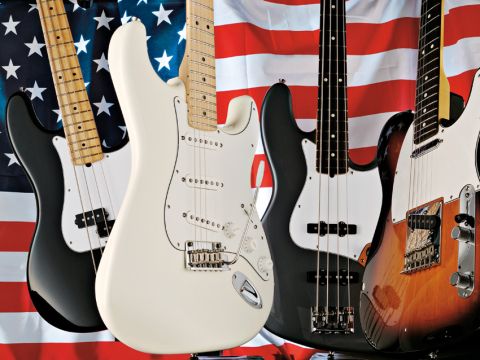 Pulling the Fender Stratocaster from the chunky and frankly excellent new rectangular Fender/SKB case there's a definite sense of purpose. This isn't an instrument to covet - it needs a stage. 1, 2, 3, 4…

Little has changed from the American Series with the overall construction. Here we have an alder body (ash is only used on the sienna sunburst finish), and though any jointing is hidden by the opaque Olympic white polyurethane finish we'd guess, typically, Fender uses a three-piece spread.

The body is routed for an H/S/H configuration, something to bear in mind if you want to retrofit a bridge or neck humbucker at a later stage. As ever, the contouring is not quite as sexy as the vintage reissue, or classic examples of the original, but it's far from clunky and you're reminded, especially in this finish, just how futuristic the guitar with all its contours and curves must have seemed some 54 years ago - not least when viewed alongside the rudimentary Telecaster shaping.

As with the American Series both rosewood and maple 'boards are offered. The rosewood, of course, is a separate piece added to the maple neck; the maple option doesn't have a separate fingerboard - the frets are installed into the front face of the thicker neck blank.

One change here is that the fingerboard (maple only) is now gloss finished, as is the headstock face, though the neck back remains satin. It's not going to please everyone; it feels and looks very new but, unlike the heavy finish on seventies-era Fenders, the finish looks thin and the big frets - approx 3mm wide by 1mm high - have more than enough girth for easy, slick playability.

Typically we have a modern 'C' profile (approx 20.7mm at the first fret and 22.6mm at the 12th) but the shoulders and fingerboard edges are nicely rounded, along with the fret ends, while the fret tops gleam, mirror-like.

Set-up - with the supplied 0.009s - is low and snappy and with your first strums and licks it's unquestionable what instrument you're playing.

Subtle changes to the new series concern the finishing. The neck, for example, has a marginally deeper tint to the finish that looks less anaemic than the previous models, but less perma-tan looking than some lower-priced Fenders and numerous copies.

This finish change, says Fender's Justin Norvell, "provides a richer tint hue and gloss. The all-satin, barely tinted old version is more a remnant from the first American Standard incarnation in 1986, which was when these instruments were in step with the contemporaries of their time (like Charvel, now also owned by FMIC)."

The undercoat on the bodies is, apparently, thinner too, for, "improved body resonance," says Fender. Subtle, yes, but every bit helps we reckon. Much of the American Series' parts are retained - the electronics, all mounted on the parchment-faced three-ply scratchplate, for example, are the same.

To recap, the Stratocaster has three American single-coils. The protruding, unchamfered Alnico V slug magnets follow a vintage stagger save for the raised G string magnet; the five-way switch offers the standard selections; then we have master volume, neck pickup tone and, lastly, middle and bridge tone. The latter is the Delta Tone 'No Load' pot that when fully clockwise is effectively removed from the circuit and allows maximum highs - turn it down to '9' and it then acts as a normal tone control.

The tuners too are identical to the American Series - the low E and A string posts are taller than the other four, which sit low to the headstock face, to facilitate a better behind-the-nut string angle - although there's still the single string tree on the top two strings.

What does change here is the vibrato. The cast 'block' saddles are replaced with standard pressed steel 'vintage-style saddles'. The string spacing is narrowed - from 55mm to 52.5mm - "for modern playability" although there's no apparent change in the neck width so the outer strings sit a little further into the neck.

The saddle height screws are "re-sized to reduce rough feel, and string slot on saddle elongated to reduce string friction or breakage," says Fender. The two-point top plate pivot system remains the same but the actual 'inertia block', visible only by removing the back plate, has changed.

"We used the old bridge block as a base platform for retrofit and consistency reasons," clarifies Norvell. "These blocks are chamfered for extra travel in the body cavity, and this way we just use the same mould as before with a new alloy (copper infused steel), which allows the costs to stay in check.

"We tone-tested these new blocks against machined blocks and were quite impressed, so you get improved mass and tone without the large increase in cost."

Surprisingly quickly this Strat falls into the 'old friend' category. There's something very right about it. Acoustically it's lively, zingy and snappy and plugged in there's nothing to surprise you.

That said it does feel and sound quite a bit more vintage-like, loose and played in than many a modern Strat we've auditioned. There's still a newness, a brashness to the sound that will more than likely mellow after playing time but there's also a roadhouse toughness to the tone that falls right into the Texas-blues camp: less rock, perhaps, than the original American Standard, while a little more used-sounding and soulful.

The newness means you wouldn't hear as much separation as you will on a Time Machine (or of course an original) but it's nicely resonant with plenty of give to the dynamics.

The shiny maple 'board with its relatively lower frets brings its own feel - a little more fight initially, though things can get rather too slippery towards the end of a sweaty set, but that very fight is part of the Strat's almost clipped note decay: it's funky but not pristine in the mixed pickup sounds, strong and hard but not over harsh on the back pickup and fruity but not dull at the neck.

As ever the middle pickup on its own seems like an afterthought but proves more than tough enough with some gain. The hum-cancelling is handy in the mixed positions but we just feel this one is less rock and more blues - well, that's what it seems to say.

For more on the new Fender American Standard Series instruments, check out the March 2008 issue of Guitarist magazine, on sale now. It contains in-depth reviews of the new Stratocaster, Telecaster, Precision and Jazz bass models alongside the usual killer blend of features, reviews and techniques.