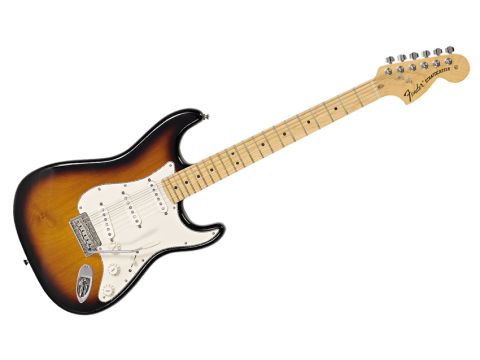 Aimed at the gap between the American Standard and Highway One ranges, this American Special succeeds with value and tone in abundance.

Fender's own take on the new American Special instruments is that they are "value-conscious guitars for the times… designed specifically to bring the full Fender Stratocaster experience of a terrific-sounding, smooth-playing, rock-solid-built US-made guitar to the working man, without emptying his bank account." Well, if anyone can fulfil that promise, it's Fender.

The American Specials' colour range is very limited albeit tasteful, with the Strat coming in two-tone burst and Candy Apple red. Our guitar is sunburst and features the thin polyurethane finish that, unlike the matt look of the Highway One models, emanates a classy and upmarket vibe.

In fact at first it's not easy to see where - and indeed if - any corners may have been cut. Billing guitars as 'cost conscious' isn't always the best way to engender excitement in a player's mind. Yet opening the padded gigbag and dragging the spoils from their slumbers, you're hit with a far more auspicious prospect; something potentially matter-of-fact becomes something altogether more enjoyable.

The American Special Strat is light in weight; the finish looks flawless and rich, while the body contours are vintage correct and lusciously curvy. A quick scan over the whole guitar reveals the type of build quality, fit and finish that has put Fender back in front of late.

Everything says 'precision' - from the unfeasibly close neck-to-body joint and perfectly adjusted action, right down to the way each pickguard screw sits identically flush in its hole (as it should, of course).

Urethane finishes are easier to apply and a lot less labour intensive to complete than the nitro-cellulose of higher end instruments, which requires more coats, more sanding between applications and is generally trickier overall. But this medium gives just the right level of lustre and can be sprayed thinly enough so as not to stifle the wood, as gloopy coatings of seventies-style polyester were said to do. This and the Strat's inherent sensuality make playing or even just holding the guitar a most tactile experience.

Our Strat's body is a three-piece affair, but Fender's done a good job of matching these 'sets' so that the join doesn't scream at you from several feet away. And remember, most original sixties Fenders were made this way - and few complained about it then.

The Special Strat comes with a satin-finished, all-maple neck and late sixties-style large headstock. Adjustment for the two-way Bi-Flex truss rod is from the headstock end, which is much easier than the vintage-style body end location.

The headstock face might have looked a little more special had it been buffed to a gloss, but that's a minor detail and a matter for personal taste. One gets the feeling that Fender has a room full of the screwless Schaller-style tuners and Free-Flyte string trees that have appeared on various models since the mid-eighties, and every so often it brings out a new model just to get rid of a few more.

That's a fatuous remark, of course, but we wonder why use these and not the more traditional 'butterfly' string tree and 'F' stamped Kluson-type tuners that would be more appropriate to this headstock style? Again, it's a minor point that's more to do with dyed-in-the-wool preconceptions than anything else - indeed both work exceptionally well, so perhaps we should just get over it!

The bridge is Fender's 56-year-old vibrato design, which still looks great, is practical and stable and, well, a Fender Stratocaster really doesn't look right without one. Chrome hardware and a three-ply white plastic scratchplate with matching knobs and switches look great against the glossy sunburst body.

In fact, this is in direct contrast to last year's similarly priced Road Worns - have we become bored so quickly with faded green, rusty nickel and distressing?

Round the back the vibrato cavity cover is the easy-access type, with one large slit instead of six oblong holes. Fender has provided the Special Strat with a wonderful neck. Shaped into a slinky shallow 'C'-section, with lightly rolled edges to the integral maple 'board, it boasts 22 jumbo frets and the eminently bendable 9.5-inch radius that's found on Custom Shop models costing several times more.

It's an addictive playing experience, as the silky smooth satin finish glides though your hand while the strings seem to give way to the lightest touch, bending to their target notes with ease and inviting the tasty 'squeezed' vibrato at which big frets excel.

The action is set low enough for speed, but with enough clearance to keep rattle to a minimum. All who played it - and everyone wanted a go - exclaimed that this was an exceptional piece of work on Fender's part and that they would all happily gig it straight out of the bag.

Over the years Fender's Texas Special pickups have received mixed reaction from our reviewers. Some love their spanky, high treble content, while others have found them rather harsh and unsophisticated.

Indeed, this reviewer has seldom warmed to a guitar that carried them. Well, how about this for a turn up for the books? Through a Carvin Vintage 16 amp - and matched against a Masterbuilt Custom Shop monster of a guitar - the American Special is a pure delight.

Whether the three-piece body and urethane finish is somehow tempering the pickups' inherent brashness we don't know, but each of the five-way selector's settings proves magnificent.

We feel that every Strat made should have a tone control on the bridge pickup - and thankfully this one does. Just knocking it back to around six on the pot transforms an otherwise potentially ear-slicing machine into something of sonic beauty.

Indeed, turn it down to three or four, pile on the amp drive and SG/335 impressions abound (this is the Greasebucket tone circuit, named by Billy Gibbons, that reduces treble without adding mush). Turn it back up to full for chorused and delayed chords and the sheer versatility of this one little pickup will amaze you.

Flip across to the neck and it's instant Gilmour: dynamic and springy when clean, but languid and flutey with more gain added. There's a lovely top-end here, too, that would make Nile Rodgers impersonations sound very convincing indeed.

The middle pickup has no tone control, so it's wide open all the time for funky riffs, pseudo Tele (think Stairway) tone and hot country twang. Positions two and four seem more defined than ever; each speaking with its own particular 'vowel' sound and both loving it either clean or messed up with a quality distortion pedal in the chain.

We love it when preconceptions are busted and in this case they've been blown wide open. This guitar is so willing and versatile that it would be at home in even the most professional situation. What's more it plays like a dream and literally stunned us with its musicality.

So, the American Special slots in under the long-running American Standard range - for many, Fender's staple Strat. The more recent, matt-finished Highway One series also fills a spot in the market between the more affordable Mexican-made guitars and the upmarket American Standard and Vintage series, but lots of people want their guitars shiny, not matt.

These American Specials take some of the best features of all the above, add a neat new twist here and there, and come up with a sparsely populated line that should instantly appeal to Fender-heads who don't have bottomless wallets, but who feel they too deserve full-on American quality - and gloss! - at streetwise prices.

If you're in the market for a versatile 'Jack of all trades' guitar then the Strat, with its five fabulous tone choices, easy-to-use contoured body and purposeful vibrato system, has to be a winner.

Once again Fender has focused its sights, aimed at the target and hit bullseye with its first shot. We'd like to see a more adventurous colour palette and better gig-bag (or form-fit case), but otherwise we can't fault the guitar at this price point.