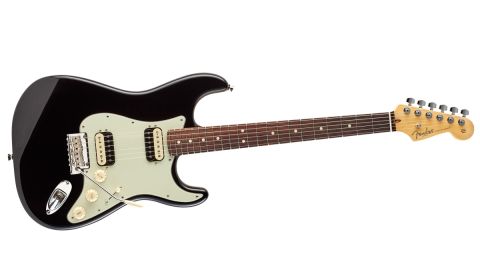 This superb new Professional model is like a Gibbo in Fender clothing.

But while the name is new, there's plenty here that's inherited from the Standard platform, such as the flattened 241mm (9.5-inch) fingerboard radius and the two-post vibratos.

The Professionals - just like the Standards before them - are designed to appeal to a wide range of players with a wide range of styles. These are not for vintage obsessives.

Most of the changes are relatively subtle: a new 'modern deep C' neck shape; new narrow/tall frets; and the Teles revert back to three (compensated) brass saddles over the previous six Strat-style saddles. And, oh yes, we've got new colours, too: Sonic Grey, Antique Olive and Mystic Seafoam join the ranks.

This Strat uses a pair of Tim's humbuckers, the difference being that the lower output Shawbucker 1 is placed at the neck and an 'overwound' Shawbucker 2 is added at the bridge.

"The 2 is a little bit hotter, but still at the lower end of the spectrum - about 8kohm verses 7.6k - for a bit more oomph at the bridge," Tim explains.

"Everything else is the same. It all works musically; it's cleaner and more subtle compared with the previous American Standard HH version. If it loses the twang, then I think it becomes a one-trick pony."

There's a 500k volume control (with the treble bleed circuit), but the guitar still retains a five-position lever selector switch that offers - aside from the standard bridge, both and neck - the inside coils of both 'buckers in position 2, and the outer screw coils of both pickups in position 4.

Plugging the HH in ups the rock factor with a little more kick from the bridge and a hugely characterful PAF/ bolt-on voice than found with the rest of the recently-reviewed Professional models.

Drop back to a cleaner Fender-style amp, though, and there's a smoother steel-y voice that, combined with the very usable coil-split combinations, makes for a very versatile platform: it might be less Strat-specific, but it moves from steel-like jazzy and swingy blues, through crunchy classic rock gains, easily into hair metal or Foo Fighters-like gained drive.

Some players will consider a dual-humbucking Strat a 'crime' - akin to adding a Floyd Rose to a Les Paul - but we don't agree It retains that percussive, brighter Fender voicing, but the dual humbuckers lose the potentially visceral cut of the single coils, while the relatively low-output voicing of the 'buckers proves highly versatile.

If you're a Gibson player, you have some tonal reference (even though you only have one volume control), yet this bolt-on platform adds cut, or indeed clarity. The two 'extra' sounds over a usual three-way neck, both and bridge setup drop in very usable contrast, although they do sound a little thin compared with, for example, the partial coil-splits used by PRS on its similar concept dual-humbucker bolt-on CE 24.

The big question is, are the Pros simply a rebranded Standard or an upgrade? For the everyman player, it's the latter.

Sonically, too, this guitar draws on plenty of classic character: take the HH and compare it with the previous Standard, and you'll find a contrast in its clear and balanced new single coils.