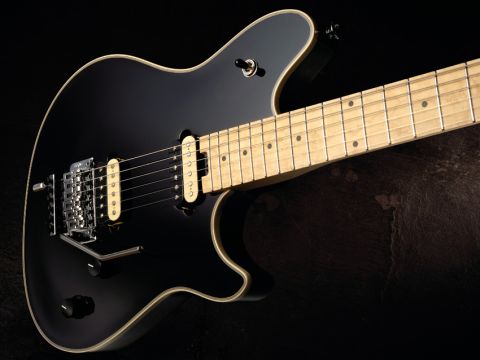 The best Wolfie yet? Without doubt it's right up there - the tone and feel, plus the overall quality that's come from the rigorous R&D process makes it a superb guitar.

After a quick trawl through our back issues, we calculate this is the 10th Edward Van Halen signature model Guitarist has played. No shame in that, of course, and after starting out with Ernie Ball/Music Man, a successful time with Peavey and now Fender (resulting initially in the amazing Frankenstein Replica), it was only a matter of time before the fledgling EVH brand produced a new Wolfgang.

"The only thing that's the same as the old Wolfgang is the body shape," says Ed. "And even that's changed a little bit: everything else is different."

EVH brand marketing man Nick Bowcott expands further: "The Wolfgang is the result of over two years of pure R&D and a year's worth of road-testing by Eddie himself on one of the most successful tours of the past few years - Van Halen's 2007-2008 US trek."

"A lot of people ask if they can get what I use," Ed continues. "Well, yes you can, and what you get is identical to what I use. We redid everything on this guitar, and that's why it took so long."

Check it out in action in this video:

So, the guitar is made in Corona, California by the team that puts together Jackson's American guitars, rather than the Fender line - something that Ed demanded.

"The Jackson/Charvel USA Custom Shop builders have a deserved reputation of crafting high-performance instruments and that's exactly what the new Wolfgang is." Nick tells us. "The reason Eddie built his own guitars in the first place was the simple fact that, from the get-go, his groundbreaking style demanded a high-performance instrument, one wasn't available, so he decided to make his own."

At first glance, it's easy to assume that the EVH version is very similar to the last incarnation of Eddie's axe. But as a former Peavey Wolfgang owner, this writer can certainly assure you that the new version is very different indeed.

That said, many of the variations are in the details, which we'll outline in due course: the shape and beautiful neck profile, however, are very familiar. The body comprises a three-piece core of basswood that sports a maple cap and is finished with a 'thin-skin' coating for extra resonance.

Even the control and vibrato cavities remain unpainted so the bare wood is untainted: now that's attention to detail.

The comfort of the neck has always been one of any Van Halen-inspired or designed guitar's major talking points. This one is composed of quartersawn maple with a matt-finished, lightly figured birds-eye maple fingerboard.

The neck features a compound radius from 12 inches at the nut, flattening out to 16 inches at the top fret. New features here consist of a pair of graphite rods that run under the 'board either side of the truss rod channel for additional stiffness and stability, and an extremely strong offset four-screw join.

Also included are 22 slinky vintage-style frets that are certainly a departure from the Frankenstein's jumbo wires - they're also manufactured from stainless steel, significantly reducing the need for future dresses or maintenance.

The pickups comprise a pair of hand-wound Alnico-loaded zebra humbuckers (with four-conductor wiring), each one mounted directly onto the guitar's body.

"Eddie had a specific sound and feel in mind for both bridge and neck pickups," says Bowcott. "After going through numerous sets and not finding exactly what he was looking for, he suggested having some made in-house at Fender and very quickly the desired sonic results were attained. They're double-dipped in wax to prevent them from being microphonic."

Ed has even turned his attention to the volume and tone controls, ultimately deciding to plump for a brace of 250k low-friction pots from Bourns - a company that manufactures intimate parts for computers, mobile phones and the auto industry. They're topped by MXR-style control knobs and do possess a very smooth rotation.

The only feature here that Ed hasn't seen fit to change is the three-way toggle. It's still upside down - the up position selecting the bridge pickup and vice versa - so if you don't like it, just loosen it and turn it around.

The bridge is an EVH-logo'd double-locking Floyd Rose unit - the company's first official signature vibrato - that also features a D-Tuna and a 41.2mm-wide locking nut. The very cool 'offset shrimp fork' design (our description) of the revamped headstock bristles with a sextet of EVH-branded Gotoh tuners capped with bijou pearloid buttons.

There's no doubt whatsoever that this guitar gives any rock player the tone taken from God's own top drawer. Full, warm and fat, yet clear and striking - big chords fill the room with that lauded 'brown' sound. Even the neck pickup - although obviously fuller and more rounded than the bridge - continues to give an excellent string separation.

The low action, skinny frets and wonderful neck also make the Wolfgang as comfortable as ever and, even acoustically, the guitar's inherent ringing tone is very apparent.

As is always the case with Ed's guitars, the Floyd Rose is set flush to the body, meaning that only downward bends and bombs are possible; it's part of his genius that he's able to simulate upward squeals by pre-bending strings - it's a cool trick to learn. However, the payoff, aside from stability, is that the strings have a far more intimate connection to the body wood than virtually any other Floyd-equipped guitar, again enhancing the tone.

Use of the D-Tuna, which quickly drops the low E a full step, leads to plenty of scope for hard metal styles and, needless to say, Wolfie can cope with modern ultra-high gains too.

If you do use genuine single-coil tones, you probably won't be attracted to Wolfie, but it is possible to obtain at least a modicum of Fender-y twang with the middle selection and some EQ-twiddling on your amp. That being said, the Wolfgang is designed to rock, and heavens to Betsy it does so quite magnificently.

Is this the best-sounding Wolfie so far? On this evidence we'd have to say that it is and, as the build quality and lovely neck are par for the course, there's no better reason to try one out as soon as you can.

On the face of it, an RRP of £2,399 - rising a further £180 for the sunburst finished, quilted maple-capped option - does seem an unwieldy figure. But considering the amount of time and research that's gone into the guitar's genesis, its USA Custom Shop build, not to mention the fact that Edward Van Halen himself plays these exact models, the price really shouldn't surprise anyone.

Add to that a truly wonderful tone, an elegant neck and excellent overall performance, and we're close to anointing this the best mainstream EVH guitar ever produced. Looks like the choice is yours, but beware - you'll want one.