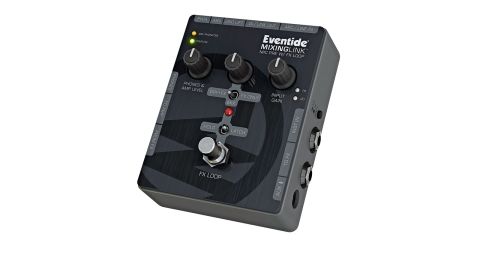 Compact, feature-packed and versatile, this clever device has a range of uses.

Eventide initially designed the MixingLink as a device to allow vocalists to access Eventide effects. Fundamentally, it's a high-quality preamp with a footswichable effects loop: a vocalist plugs a mic in, the output goes to a PA and when effects are needed for the vocal, the footswitch will bring them into the signal chain.

That's just one use, though - the MixingLink's facilities make it a battery or 9V adaptor-powered Swiss Army Knife-style device that has loads of applications to suit us guitarists.

The connectivity is pretty darn comprehensive. The MixingLink accepts mic and line signals, but also has a separate input for guitars, and for outputs, you get a mono output for your amp and a stereo headphone output (both controlled by a volume knob), as well as a balanced XLR output. This means you can send a simultaneous signal to a PA or recording system. Nice.

The effects loop has standard jacks for connecting your pedals, but also has a 1/8-inch aux connection that, with the correct four-conductor cable, enables you to send and return a signal to a mobile device so that you can, for example, use an iPad as a source of effects.

This socket can also be used as a recording output to a mobile device or to bring in backing tracks to blend with the main signal.

The footswitch to access the loop can be latching or non-latching (great for bringing the loop in momentarily) and you have a knob and three switchable modes to balance the effects return against the dry signal. All of this leads to myriad uses.

Firstly, we try the MixingLink as a switcher on a pedalboard, putting three pedals in the chain that together create a great sound into the MixingLink's loop so that we can leave all three permanently on and bring the composite sound in using its single footswitch.

You don't have to use the effects loop purely as an effects loop, though, as the MixingLink can also be employed to connect two guitars to one amp, or one guitar to two amps.

In the first scenario, if you are using two guitars onstage and need to switch between them quickly without unplugging leads, you connect one to the normal input and one to the effects return.

Likewise, you can have one amp connected normally and the other to the effects send. Depending on how you set up the MixingLink, you can either switch directly between them or bring in a blend of both.

Another use for the MixingLink is as a portable practice amp. Simply connect a pedal or two and utilise the headphone output for a bit of silent playing - maybe along to music library of your phone or mp3 player, which you can plug into the aux input. Sweet.

The MixingLink is one cleverly designed and engineered widget: a utility item that any guitarist could find numerous uses for. It could be an essential item in your gigbag.