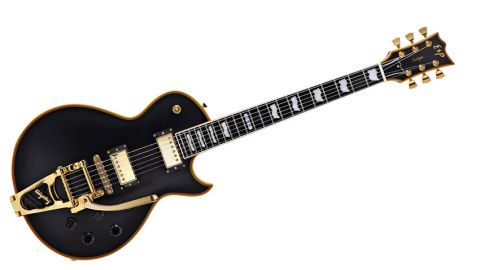 The Bigsby might alienate ESP's metal fanbase but the retro appointments have transformed the Eclipse into a modern classic.

The ESP Eclipse was born as a Les Paul derivative back in 1995, though true guitar geeks will recall a Tele-inspired model of the same name manufactured by ESP in the late 80s.

Anyway, no sooner had ESP launched its new guitar, it found itself in a pickle after Gibson grumbled about the similarity of the Eclipse to Les Paul's lifelong single-cut companion.

A return trip to the drawing board saw the Japanese company revise its doppelgänger's profile with a wider, pointier [aka Florentine] cutaway and a three-control-knob format. The established Eclipse recipe also features a thinner body than the Gibson, with ribcage contouring and distinctive racing-flag fingerboard inlays.

Aside from Rolling Stone Ronnie Wood and his Tele-esque signature model, the ESP endorsee list is almost entirely populated by hirsute lads in metal bands who always seem to forget to say "cheese" when they're having their photo taken.

Those of you traditionally repelled by the full-on metal vibe of EMG-equipped ESP/LTD models may find solace in this Seymour Duncan SH-4 JB (the 'Jazz Blues') and SH-1 '59 neck 'bucker-spec'd guitar now residing in the ESP catalogue.

You see, the Eclipse before you is not your typical ESP. It's packing an old-school Bigsby vibrato for goodness sake...

"Second, it gives you a mellow vibrato sound that you never can get from locking units." In deference to Mr Suzuki's first point, the Eclipse-I CTM (the initials refer to the guitar's custom, toffee-coloured multi-ply body binding) is indeed a beautiful-looking object, even if it has appropriated its eye candy from the '57 Les Paul Custom.

Come on... Elvis Presley and Shakin' Stevens might both look the part with a DA haircut, pink pants and a flecked sports jacket but no-one's pretending that Shaky came up with that look first.

The black satin finish conceals a maple-topped slab of mahogany and a set mahogany neck. The ebony fingerboard accommodates 22 extra jumbo frets and those great-looking inlays that run from full-size racing flags to squashed French fries the closer they get to the guitar's body.

The gold-finished hardware includes a genuine (not licensed) Bigsby B7 vibrato, a tune-o-matic-style bridge with roller saddles and a set of locking tuners with large tulip-style buttons.

This reviewer can't be the only one who wishes gold hardware would go the way of the dinosaur, Timmy Mallet and leg warmers; it's just so impractical. The plating has already rubbed off a little on the bridge pickup's metal cover. Nickel would look just as good: it will certainly age better.

The only issue we have with this guitar's otherwise flawless construction lies with the anchors that secure the bridge in place. They aren't fully recessed into the top of the guitar. It doesn't affect performance or tuning stability (which is rock-solid on this guitar), but it looks careless on a guitar of this price.

The Duncan JB and '59 humbuckers are the Morecambe and Wise of the pickup world; it's hard to imagine one without the other. Mr Suzuki plumped for Seymour's iconic combo because they can run from a "mellow vintage tone to really aggressive overdrive sound by controlling volume and tone". Hear hear, we say!

Secured in a maple-capped mahogany body, these pickups can be pretty much what you need them to be. Judicious tampering with your amp's dirty channel and EQ section can pull 50s rock 'n' roll, 60s-and-beyond white-boy blues (Eric Clapton, Peter Green, Mike Bloomfield... and Joe Bo, natch), old-school rock riffs (think Jimmy Page and Slash), razor-sharp punk (Sex Pistol Steve Jones) and 80s-to-modern pinched harmonic-drenched metal sounds (in the Randy to Zakk ballpark) - all from the same two pickups.

This ESP offers flawless playability via a thin U-profile neck and a flatter fingerboard radius than a 304mm (12-inch) spec'd Gibson, not to mention awe-inspiring sustain, likely thanks to that large chunk of beautiful Bigsby screwed to its body.

As great as it is, the better-established EMG-loaded Standard Series Eclipse-1 CTM is not a hugely versatile guitar. It's a fire-breathing behemoth for sure, but it doesn't do clean too convincingly in our opinion. The story is very different when you insert the Seymour Duncan JB and '59 pickups into the plot.

These units clean up like a Womble on speed, with bags of Johnny Marr-flavoured sparkle from the bridge unit when you ditch the dirt. Combine both pickups, add some echo, and wiggle that Bigsby for cool rockabilly stuff. You wouldn't catch someone doing that on an EMG spec'd Eclipse.

The ESP Eclipse-1 CTM Vibrato is an intriguing prospect. We did wonder why it was priced so high. "You'll get the answer when you play it," teases Mr Suzuki.

To be fair, yes, this is a very well-conceived and executed concept. Aside from the bridge-post niggle, construction and finish are first class. Yes, a couple of grand will buy you a used Gibson Les Paul Custom in good nick but the Eclipse has always been about offering that classic package, streamlined for a modern-rock demographic.

To that end, our new 'Vibrato' version channels the vibe of a heavyweight Bigsby-loaded LP Custom into an easier-to-shoulder format (without compromising sustain) with a versatile tonal palette thanks to the non-active pickups.

It probably won't eclipse the appeal of the original US classic for the purists but others will be over the moon with the gravity of what this vibrant new variant has to offer.