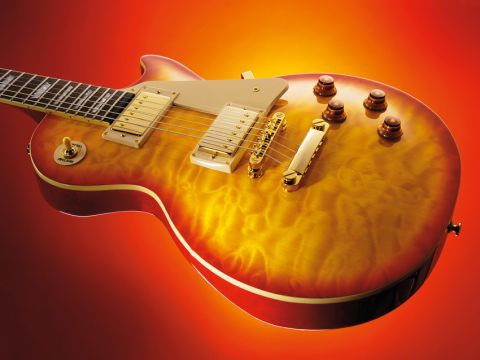 If you want a hybrid but are priced out of the ‘super guitar´ market, look no further.

Since the emergence in recent years of hybrid electrics such as the Taylor T5 and Ovation VXT, so-called 'super guitars' have become a major industry trend, alongside artificial ageing and chambering.

The genre was kick-started by the Parker Fly and Hamer DuoTone back in the early nineties, the goal being to make guitars that can deliver both traditional electric, and plugged-in acoustic tones. Indeed, it makes perfect sense for any 'normal' gigging guitarist to want a single guitar that delivers something sonically more flexible than what was cutting-edge technology back in 1957.

Given that the majority of Gibson's best and highest-profile new instruments are resolutely backward-looking - the jury is most definitely still out with regard to the Robot Guitar - it's interesting that the stable's new model most in-tune with the zeitgeist arrives with an Epiphone logo atop its headstock.

The Epiphone Les Paul Ultra-II preserves all the features of the previous Les Paul Ultra model - principally chambered construction, a ribcage contour and satin neck finish - and throws a Shadow Electronics NanoMag pickup into the mix.

The NanoMag, mounted after the 22nd fret on the fingerboard, is hooked up to a simple three-control active preamp integrated into the control cavity plate around the back of the guitar.

According to Shadow: "The NanoMag is a magnetic pickup with an air-coil and a composition of different samarium cobalt magnets incorporating active electronics in a minimum of space. The pickup is protected by an epoxy layer, and the silver-platinum shielding will provide, together with the active electronics, a low-impedance hum-free output signal."

Alongside the NanoMag, the Les Paul Ultra-II has a pair of Epiphone's Alnico Classic Plus humbuckers with twin volume controls and a master tone. Where you'd usually find a Les Paul's neck pickup tone pot you instead find the NanoMag's volume control. This is augmented by treble, bass and gain preamp controls around the back on the rear electronics cavity coverplate.

In practice, the preamp control placement is fine in a studio environment, but a little awkward when the guitar is strapped on in the heat of battle. We can only imagine that most players will tweak the preamp pots to taste at soundcheck or in rehearsal, then possibly apply some gaffer tape over the top of them to avoid disturbing them while playing.

They don't sit much more than a millimetre proud of the control plate, but it would be easy for someone who rocks out with their Les Paul slung low to disturb the settings with a knee mid-flail.

A pair of outputs facilitates a twin-amp or amp-and-DI set-up for gigging or recording, which we'd always give the nod to in terms of sound quality and flexibility when compared to a blended acoustic and electric signal via a mono output, but more on that later.

Forgetting the electronic side of things for a moment, the overall finishing and assembly standard is consistent with other Chinese Epiphones we've seen recently. It's perfectly acceptable given the price range, but close inspection reveals a little scruffiness.

The headstock's black facia paint has been allowed to bleed over the edge and the line of the black finish itself doesn't follow the headstock outline particularly rigidly - viewed straight on there are areas where you can see a little more red than we'd like.

At the other end of the neck there is a similar sketchiness where the neck joins the quilted maple veneer top on the bass side. That said, standards are higher where it counts more - the fretwork is neat and tidy and the satin-finished maple neck feels smooth, with only the tiniest hint of a lip perceptible where the binding meets the wood.

It's always going to be a subjective thing, but we can't help feeling that the quilted maple veneer is a little too gaudy; gold hardware in combination with a cherry sunburst just looks wrong on a Les Paul. Gold hardware on a Custom, yes, but on something resembling a Standard it just seems like overkill to our eyes. Give us a plainer top and chrome, or better still tarnished nickel, hardware any day of the week. It's purely personal, though.

Aesthetic preferences aside, the usual cursory unplugged strum reveals an instrument with a lot more unamplified life than you might expect from something that looks, to all intents and purposes, like a Les Paul Standard. The chambers and the maple neck combine to deliver an almost semi-like loud sprang that bodes well both for the Alnico humbuckers and the active NanoMag circuit's performance.

Check out this video of Guitarist Editor Mick Taylor putting the Les Paul Ultra-II through its paces:

Dealing first with the more traditional pair of Alnico Classic Plus pickups, we find most of the expected Les Paul boxes ticked, with an added airy quality and a pinch of ES-335 dynamism.

There's certainly more twang in the equation, making this the ideal Epiphone Les Paul for snappy soul licks and blues tones that are more Bloomfield than vintage Clapton. There's warmth and push if you need it, but it's definitely a brighter, more dynamic take on what most people will think of as the archetypal Les Paul grunt.

Into a regular electric amp using the mono output, throwing in some of the NanoMag's signal adds a hint of acoustic quality, but without separation it's clear that we aren't using the instrument to its strengths. Better results can be obtained by hooking up the stereo outputs to separate, dedicated electric and acoustic amplifiers.

Anyone who has seen The Who live or on television recently will have heard Pete Townshend using a blended electric and 'acoustic' tone from his modified Strats, and for adding extra texture and interest to rhythm parts the Les Paul Ultra-II really shines. It's even more effective if you are the sole guitarist in a band - you can add real width by experimenting with blended tones.

Using the Shadow pickup on its own, nobody is going to be convinced that you have an acoustic player hidden somewhere in the wings; but the sound is easily as effective in a live context as many piezo-equipped acoustics we've heard. In a home studio, where volume is an issue, the NanoMag is also useful for throwing an acoustic flavour into the mix without causing your neighbours to bang on the wall.

This is a real working musician's Les Paul that takes the classic blueprint and adds comfort - via a lightweight chambered body with a ribcage contour (although we've said before that if you have a Les Paul hitched up so high that the back is resting against your ribs you're getting it all wrong!) - and a huge injection of versatility. Tonally too, it offers a meaningful contrast to the denser sounds of a traditionally built Standard.

While it does seem a shame that a real working musician's Les Paul has to come with such onboard bling in the shape of the gold hardware and quilted maple veneer, it's a perfect example of how a classic design can be tweaked so that it's forward-looking, without straying too far away from what makes it a Les Paul in the first place. We only hope that Gibson will follow Epiphone's lead with a similarly spec'd Les Paul Standard. In the meantime, this'll do nicely…