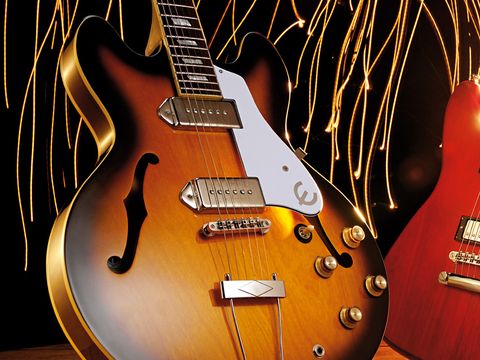 A sub-£1000 hollowbody with US upgrades, wonderful vintage Casino aesthetics and sound, plus an affiliation with its most famous user. What's not to like?

While the calibre and heritage of Epiphone's discontinued, USA-made John Lennon 1965 Casino can hardly be questioned, it had one major drawback: the price!

Retailing on the cusp of £2000, for many guitarists not even the high build quality could compensate. This tale isn't unique among Epiphone's American-made guitars.

Keen to redress the balance for those with smaller pockets, Epiphone has launched the new Indonesian-made 'Inspired By' John Lennon Casino - £1,200 cheaper than the former USA model and £400 more expensive than the standard Chinese-made Casino.

One event more than any other led to the Casino's enduring popularity. In 1966, with Paul McCartney already using his 1962 Casino on many famous tracks such as Taxman and Paperback Writer, John Lennon acquired his very own sunburst model.

It's argued that McCartney's use of the model was the more impressive from a musical perspective, but Lennon definitely did more for it visually than any guitarist before or since.

Contemporary players such as Paul Weller and Noel Gallagher have also become synonymous with Epiphone semis but, as we know, their inspiration draws directly from The Beatles and The Rolling Stones.

Here, Epiphone has borrowed Gibson Custom's Historic 'Inspired By' moniker as a means to upgrade the standard Casino with USA appointments, but retain that famous artist relation at a modest price - perhaps due to the fact that Epiphone has, as mentioned, discontinued the USA-built equivalent.

Hear it in action in the following audio demo:

Like the ES-330, the Casino's maple laminate body is completely hollow and shares the distinctive twin-cutaway shape with single-layer, off-white binding on the front and back edges, which in this case is extremely well done.

The 'Inspired By' also features a more vintage-correct sunburst than its Chinese counterpart, where the 'burst is wider to the edges and has a more luxurious, deeper gradient as seen on sixties examples. However its scratchplate, as on our regular Casino, is still a little cheap looking and it's common for players to remove it.

In keeping with the original, the 22-fret neck joins the body at the 16th fret, which is three further back than a centre-blocked ES-335 and one further than our Chinese-made standard Casino.

We also see the inclusion of parallelogram-shaped block inlays placed neatly into the rosewood fretboard, as seen on original Casinos of that period. The slim-taper neck, with its medium gauge fretwire and a 355mm (14-inch) radius makes for a very comfortable feel and low-playing action.

Mind you, the high-gloss finish on the back of the neck is a bit 'sticky'- some players might have preferred a more 'played in' feel.

Further testament to Epiphone's vintage-correct efforts can be seen in the smaller details: small button vintage Kluson-style tuners, a black ring around the toggle switch, Gibson-style control knobs and a rectangular blue label in the soundhole.

A nickel-covered trapeze-style tailpiece, as seen on the ES-330, and a twin-pillar-mounted tune-o-matic bridge complete the hardware. Surprisingly, the only visual clue to its famed user is a small and subtle gold signature on the back of the long, 'moustache'-topped headstock.

Starting our sound test with a modest amount of overdrive (and using our Chinese-made Casino for comparison) the Lennon has a wonderfully mellow, airy tone that really fills out a band's sound and is synonymous with this hollowbody design.

It's different to the classic ES-335 centre-blocked design, which lends itself to more pumped-up rhythm tones. The American pickups sound notably different to those on the standard Casino, letting the natural acoustic and percussive resonance shine through, bolstering the character and charm of the hollow design.

The bridge P-90 is both angular and sprightly, and does those cutting BB King-style solos with seeming aplomb. Alongside this, the middle and neck positions offer open and expressive jazz and blues-rhythm tones that some of the greats, such as Grant Green for example, built their careers on.

The key to the Beatles tone is in the volume control. Setting your sound with a little more gain and dialling down the guitar's volume changes the character of the Casino.

Here, you'll find that acoustic quack and clean bite needed to pull off the kind of tone found on the opening of Taxman - be careful though, due to its hollow construction it will feed back a fair bit, so be wary of your amp's volume and the amount of gain used.

Overall, this 'Inspired By' Casino has that vintage-like tone down to a tee and is wonderfully musical. In comparison, the far cheaper standard Chinese-made Casino lacks the charm and charisma of the 'Inspired By' model - both tonally and visually.

In general, artist edition guitars seem to be getting increasingly expensive, so it's nice to see Epiphone taking a more affordable tack with this Casino. By adding subtle vintage aesthetics that really capture the essence of the original and employing quality American upgrades, it's a superior package than the standard Casino and way more affordable than the previous USA model.

The price may still seem steep for some, but consider this: the upgrades alone would set you back the £400 difference between this and the standard Casino, it includes an Epiphone Limited Lifetime warranty and a quality hard case, plus a portion of the proceeds from each sale gets donated to the John Lennon Scholarship Fund for music education.