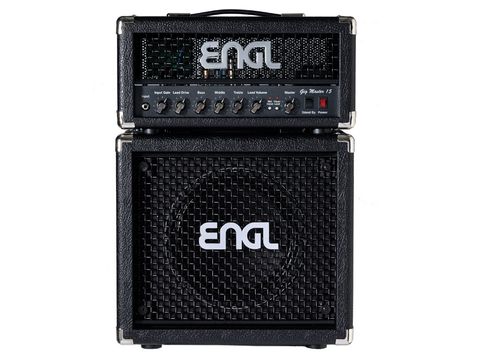 At this price the Gig Master 15 is no small purchase, but you can't argue with that classic valve tone.

Either we're getting taller or amps are getting smaller. Turns out it's the latter, and high-end German manufacturer Engl is right on trend, shrinking its valve technology into the Gig Master 15 (here with a G10N-40 cab).

It's a king-sized £597 for this squat setup (including cab at £161), but there's justification on the spec sheet, with ECC83/ EL84 preamp/power valves, twin channels and a 'Power Soak' that lets you juggle overdrive and output to perfection. All in a chassis small enough to make you feel like Godzilla.

The Gig Master 15 isn't as stripped as some valve amps, and a big advantage for live work is the option of setting dedicated gain levels on clean and lead channels (although we'd have liked the Z-4 footswitch, another £77, thrown in).

It's not just the compact dimensions that give this setup a 'take-anywhere' vibe; there's a gig-able 15-watt grunt, while the Power Soak drops the output to five watts, one watt or even 'speaker off' mode.

It's not a radical departure from the 'textbook' valve amp tone, but there's no doubting its sonic character. The clean voice has a warm, brown, full-sounding vibe that's not a million miles from a classic Marshall.

It's got useful headroom, but the best results are dug out when you edge up the gain to allow a hint of dirt into the mix when you hit hard. Nudge the mid boost, meanwhile, and you've got a world-beating rhythm tone.

It can be a battle to get valve amps to supply defined distortion, and that's true here: fat, frayed, Zeppelin-sized riffs tumble from the speakers, but it took a fully pumped Treble and a Tele at the bridge pickup to get that 'hot-knife-through-butter' lead tone that's imperative in a busy mix.

Despite Engl counting Megadeth and Shadows Fall among its clientele, we have to say that you'll need an outboard pedal to really make this amp deliver skull-splitting modern metal tones. Suddenly, that price isn't looking quite so 'micro'…

Valve amps are a lifestyle choice: they're heavy, relatively expensive and lack the presets and effects that help cover all your bases in a fledgling band. That said, if raw tone is your prime concern, they're still unbeatable, and this is a damn fine example, giving that classic, warm tone, and sweetening the deal with tons of features that make it almost as practical as a solid state.

Factor in the cab and the footswitch and it's a heavyweight purchase, but when those valves glow orange, the pleasure you'll get from the Gig Master's undistilled valve tone should be justification enough.