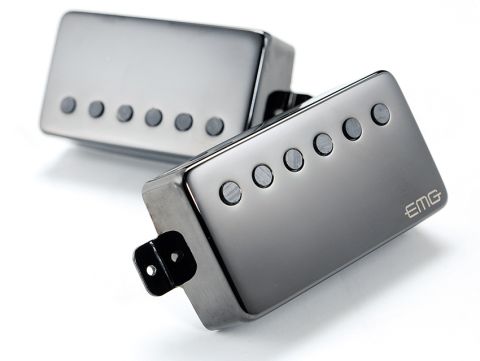 The most revered right hand in metal has consistently sat directly above an EMG combo since the early 80s. It makes sense, then, that EMG and James Hetfield have finally teamed up to build a set of pickups to his specifications.

Apparently, pounding out aggression really does turn into obsession: Hetfield tried around 20 custom made EMG pickups before settling on the magic properties of 'number 19'.

The JH pickups fit to your guitar using EMG's solder-less connections. If you're upgrading from another EMG set, installation is as easy as undoing a few screws, and plugging them in with the onboard connector. If not, you'll need space in your guitar for a battery and EMG's connector buss, plus you'll need to swap your pots for the included set.

Once they're in, you'll get a fat low end from the neck position. Played clean with some chorus, it nails the sound from the intro to One; with a healthy slice of gain, it's great for down-tuned grinding rhythms.

The bridge position sounds almost lacking in bass in comparison, particularly on clean sounds, but it's when you add gain that you start to appreciate it. Picking attack is enhanced, and it gives you a tight response in the mids.

It makes sense for diehard Metallica fans who want to move from passive to active to choose the JH Set. Compare them side-by-side with Hetfield's much loved 81/60 pairing, and the difference is visually and sonically noticeable.