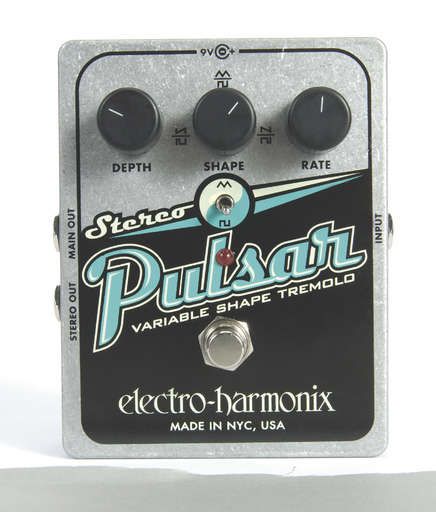 The Pulsar is great value and outstrips its competition with the addition of stereo operation.

In recent years, Electro-Harmonix have been onto something very good indeed by offering their unique brand of frazzled stompbox psychedelia in more compact and robust housings.

Alongside the genuinely pocket-sized Nano line, there are the slightly larger EHXO pedals, such as this Stereo Pulsar.

Like its siblings the Stereo Polyphase and Clone Theory, the Stereo Pulsar is a stereo modulation unit wth a diecast aluminium Hammond-style chassis.

It should stand up to years of heavy stomping. The lack of a quick-release battery access hatch isn't really an issue with something like a Big Muff, as the battery life is such that you won't have to unscrew the back plate very often.

However, in the case of modulation effects such as this, it's often a different story. We would like to see some provision for this in the form of a simple plastic hatch, or metal plate like many manufacturers utilise.

The original Pulsar was a more recent addition to the EXHO range, but operated in mono and came in a large, Big Muff-sized package.

The addition of stereo outputs here is a big plus for more dramatic panning effects that ping-pong from one channel to another, while the smaller footprint can only be a good thing.

Essentially the pedal provides a great deal more control over the shape of the waveform than most tremolo circuits thanks to a toggle switch that flips between triangular and square waveforms and an accompanying shape knob.

In triangular wave mode, as the shape knob is turned from left to right the waveform changes from a rising sawtooth into a triangle at the centre position, then finally into a falling sawtooth at hard right. In square wave mode the mode knob has a similar effect, moving from a small pulse width wave, into a square wave, then into large pulse width wave at hard right.

So that we could experience the full psychedelic spread of this modulation pedal, we set up a pair of valve combos either side of a decent-sized room. Suitably prepared, we set about enjoying the hypnotic panned throb of the Stereo Pulsar.

It's easy to forget just how musical an effect tremolo can be and, despite it being one of the oldest effects available to guitarists courtesy of Fender and Vox amplifier circuits, you still don't hear it on the radio all that often.

The Pulsar's controls allow you to mimic old-school amp tremolo effectively, but some of our favourite of its sounds are the more dramatic How Soon Is Now?-style gated staccato flourishes.

The depth control is interesting as it produces the most dramatic panning effect at around two o'clock, after which the sound begins to warp and the signal becomes more overtly modulated.