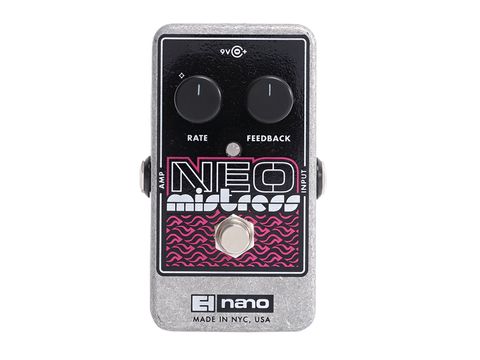 If you want a straight-up flanger for your rig, check this out.

The Electric Mistress is a truly iconic stompbox and, at the feet of master players such as David Gilmour and Andy Summers, it can produce some wonderful flanger tones.

E-HX's Nano range of small-sized, stripped-down versions of these and other classic units of yore offer an improved simplicity of use in comparison with their bigger brothers, but even the Stereo Electric Mistress, which we confess to using a great deal, offered both a chorus and a flanger.

The Neo Mistress is a straight-ahead flanger, doing away with the always-mysterious resonance and manual pots often included in the spec of such an effect in favour of rate and feedback pots. It possesses the customary sturdy construction and enigmatic vibe.

Where to start? The sound changes with every combination of the two pots and we were able to recreate just about all scenarios we could think of: the unmoving honk of Stereophonics' Dakota, the classic wobble of Message In A Bottle or the clean Hysteria-period Def Leppard shimmer.

Most flangers are fun to experiment with, but we didn't find a tone we couldn't envisage a use for here. The one effect it doesn't seem to be able to do is an all-out jet flange, but all in all the Neo Mistress is incredibly versatile.

Flangers are best used sparingly, thus you may not be too keen on spending a fortune to have one in your rig. But at under £60, this Mistress is certainly worth spending some quality time with.