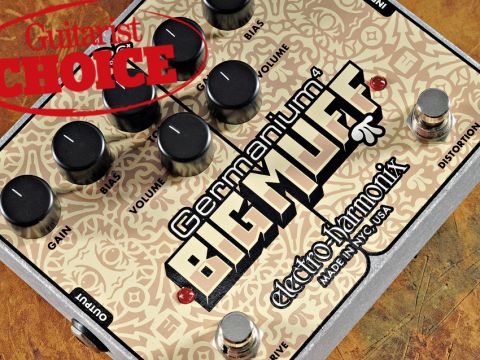 Separate overdrive and distortion for the price of a single stompbox, and with enough control to create a wide-ranging dirty tone.

Electro-Harmonix revealed several new products at this year's Summer NAMM show, including a headphone amp for practice and a stompbox-sized amp head. Also new were an analogue chorus pedal and the pedal we have here for review: the latest in the Big Muff family - the Germanium 4 Big Muff Pi.

"The distortion section is capable of much more dirt than the overdrive section and the two together pile it on further, creating plenty of sustain."

The pedal is delineated into two sections, the left housing the overdrive footswitch and four knobs to control the sound, while the right-hand side is similarly dedicated to the distortion. Both effects have a gain knob for preamp gain and a volume knob to set the output level. Both also have a Bias knob, which is designed to change the character of the effect by changing the bias of the signal before it hits the transistors.

Besides these controls, the overdrive section gets a simple Tone knob while the distortion section has a Volts knob that adjusts the amount of voltage supplied to the circuit - turning it anticlockwise simulates a dying battery, compressing the signal more and making it start to clip.

The overdrive section of the G4BM provides crunchy, just breaking up and overdriven amp sounds adding an extra facet when playing through a clean amp, but providing enough oomph to tickle the front end of an overdriven unit further into the zone if you want it to.

There's plenty of control over tonality too, with juxtaposition of the Bias and Tone knobs covering a very useful range. Likewise in the distortion section, turning the Bias knob clockwise can dial in a strident top-end presence that will penetrate a mix, while the Volts knob can change the texture and character of the sound, rolling back towards buzzy fuzztone territory before crapping out completely into sputtering dead battery-style sonic mayhem.

The distortion section is capable of much more dirt than the overdrive section and the two together (the distortion feeding the overdrive) pile it on further, creating plenty of sustain but with a different character to the fat, saturated sustain that's generally regarded as the classic Big Muff Pi sound. A Big Muff Pi in name then, but the completely new circuit design makes it quite a different beast.

Twin overdrive or distortion pedals are becoming more common and are a practical choice for the gigging musician. This Big Muff is one of the more versatile of the genre, offering not only two quite distinct sounds but also the ability to use both together as well as individually for some distinct dirty textures.

Now listen to our audio demos to hear what the Germanium 4 Big Muff Pi can do: