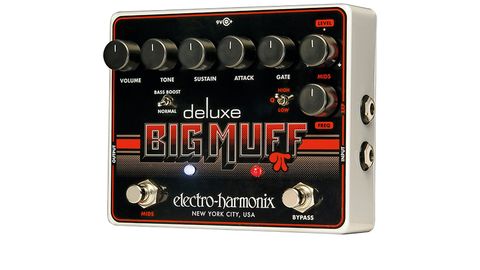 With its carefully considered new features, the Deluxe Big Muff is massively more potent while still retaining its essential character.

Electro-Harmonix's latest contribution to the pedal world, the Deluxe Big Muff Pi, adds another layer of versatility to the iconic fuzzbox.

Most of EHX's Big Muff variations have stuck to the tried and tested three-knob configuration, with volume and sustain knobs complemented by a tone knob that spans a wide range.

This new Deluxe version adds a noise gate, adjustable note attack, toggle-switched Bass Boost, and an extra footswitch that brings in midrange EQ adjustment to the unit to help it stand out in a mix.

If you don't engage the extra features, the Deluxe Big Muff is a classic Muff through and through, with predictable operation and tone.

The Bass Boost adds some welcome low-end heft if you wish to bolster the sound when the Tone knob is rolled up.

The noise gate works well rolled back just far enough to kill any hiss when you're not playing, but you can also use it for an obvious gated fuzz effect, and the Attack knob can add some useful gritty pick definition.

The new parametric Mid EQ facility offers cut or boost at the midrange frequency you select in either a broad or narrow bandwidth (Q), which means that you can variously scoop the mids or dial in a sharper edge (quite extreme if you want it) to make your tone cut through in a band context.

With the footswitch allowing it to be brought in at any time, you can have instant access to two disparate or complementary sounds.

The frequency can also be controlled via an expression pedal that you can exploit for some cool wah-style effects.