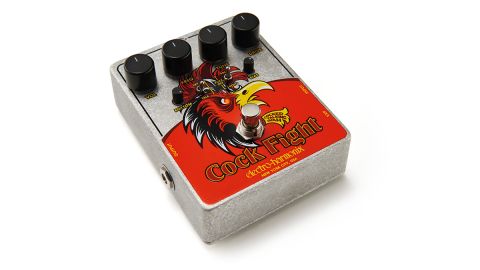 This thing is money, for next to nothing.

The cocked wah' sound has been heard on many a classic track - from the opening riff of Dire Straits' Money For Nothing to Mick Ronson's tone on Ziggy Stardust.

And that's the sort of sound the EHX Cock Fight has in store for you.

You can use the Cock Fight as a regular wah by plugging in an expression pedal (not supplied), but that's not really the point. Instead, twisting the frequency knob a good old twist - it mimics the sweep on a classic wah pedal - find a tone you like and then park it. Boom... cocked wah sound.

And it has one more big trick to pull you in. Below the big knobs you'll find a bank of controls and switches for the onboard fuzz circuitry. Vintage tone freaks will be blown away here as EHX has managed to get pretty damn close to the sound of a 60s Tone Bender fuzz box, the pedal stomped on by Jimmy Page on the first Led Zeppelin album, and Mick Ronson during his time with Bowie.

We're sold. You're getting some great wah sounds, and a fantastic fuzz, for less than a hundred sheets here. It's a shame you can't run the fuzz circuit independent of the wah side of the Cock Fight but you can't win them all.