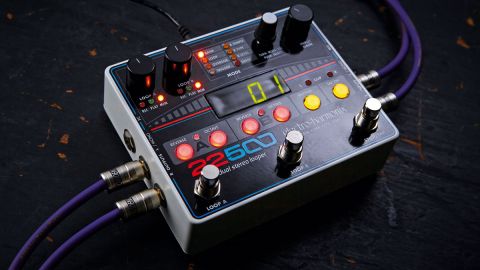 The 22500 offers a creative environment for recording, layering and playing back loops for a reasonable price.

Anyone who has used a basic looping pedal will know how enjoyable and creative it can be and may soon want to take things further with a larger, more complex pedal that expands the basic functionality, perhaps with multiple loops.

The 22500, recently launched by Electro-Harmonix, could fall into that category, as it's capable of two simultaneous stereo loops, loop A and loop B, which can be totally independent of each other or linked in a variety of ways. The pedal will accept a normal mono guitar signal or a stereo input and is also equipped with an XLR input (with switchable phantom power) so you can plug a microphone in.

The 22500 records its high-quality 16-bit/44.1kHz audio in wav format directly to a removable SDHC card slotted into its rear panel. Cards from 4GB to 32GB capacity are supported, each having the capacity for 100 banks of two loops each, but the pedal comes supplied with an 8GB card that's good for 12 hours of recording. On that card, you'll find a choice of 16 rhythm loops for use as a rhythmic reference when recording your playing.

A USB connection allows the transfer of files between the 22500's memory card and computer, so you can back up any loops that you record and maybe transfer them to a DAW. Conversely, you can also load wav files from your computer into the memory banks and designate them as loop A or loop B in the bank. You can also load new rhythm loops to supplement or replace the factory ones.

For a three-footswitch pedal, the 22500 is actually relatively compact, but those three switches are still practically spread out. Two footswitches take care of functions for loops A and B respectively, while the third stops and starts playback and also operates as a tap tempo switch.

You can add a dedicated dual Loop Controller footswitch (£65), which offers loop selection - the loop up and loop down footswitches move through the 100 loop banks either 1 or 10 banks at a time. As well as loop recording being initiated by footswitches, there is also a Trigger function, with a user-set threshold, initiating recording the instant you start playing. Once loops are recorded, there are manipulations for each, taken care of with a pair of backlit functions above each loop's footswitch.

While there are straightforward knobs for input gain and the levels of each loop, setting up is done by a turn- and-push knob that scrolls through a set of eight modes and edits the parameters in each, which are laid out in the display. That turn-and-push knob and small display have their work cut out engaging and indicating the many functions of the pedal. Consequently, the 22500 isn't very intuitive and studying the manual is essential to set it up for how you want the looping to work.

The first step is to set up the loops to be freeform (totally independent) or locked together. If you choose the latter, you can then set the length of loop B as a multiple of loop A (in whole numbers to a maximum of nine times longer). The third step is whether you want to quantize the loops (in beats-per-bar relatedto the onboard rhythms), while the fourth step sets whether you want the loops to play in parallel (playing simultaneously) or sequential mode (only one loop plays at a time ). You can also set loops A and B to play as one-shots rather than looping continually.

Another useful parameter is like a delay's feedback parameter, but sets how fast (from 0 to 100) each loop cycle fades away when overdubbing onto a loop: a setting of 100 ensures that the previous version of a loop remains at the same volume during an overdub.

Once you get the hang of it, operating footswitches is second nature and the 22500 becomes a potent tool for home practice, songwriting (not least because of that file transfer) and live performance, where you can choose to layer the two loops or play them sequentially for a verse/chorus structure to make music over. Not the most intuitive, but a lot of looper for the money.