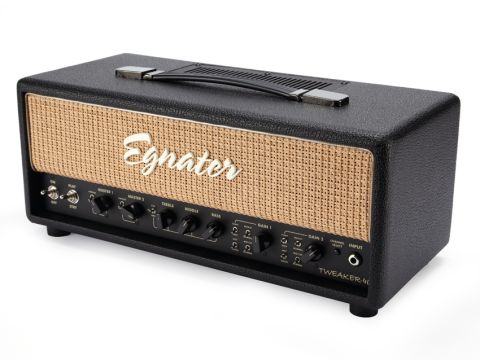 A tweakable and giggable head that won't slip your disc, shred your overdraft or spare your audience.

Cali amp guru Bruce Egnater has piled up the plaudits with the original Tweaker and reckons this one is more powerful, more toneful, "the ultimate gigging amp", no less.

The Tweaker-40 is all about dialing up your ultimate sound and, weirdly, rather than force punters into the time-honoured choice of clean or gain, this head's two channels start off identical and let you decide where they end up. It's either a refreshing blank canvas or a slight cop-out: we'll let you know.

"The Tweaker-40 is seriously tweakable, and it's possible to create a twin-channel assault that's either chalk-and-cheese or merely subtly different."

The Tweaker-40 has a slightly divisive laundry-basket vibe, but the slightly recessed dials are unlikely to get smashed off. It's worth noting that you even get the footswitch thrown in, which is a pretty cool sweetener given the whole channel-jumping philosophy.

Let's plug into channel '1' and commence the tweakathon. If you're a modelling fan, your first stop will undoubtedly be the nubbin next to the EQ, which gives the choice of three tone control circuits: 'US' (which delivers a great Fender-ish roar), 'Brit' (a brilliant, boomy Marshall-esque bark) and 'AC' (which is a good Vox approximation, though admittedly a bit pale-sounding next to the real thing). We love the Vintage/Modern switch, too, and especially the tight, aggressive tone of the latter.

And so it continues. By each Gain control, you've got a cluster of four more subtle fine-tuning switches. There isn't room to cover all the tones; suffice to say that selecting 'Hot' and 'Tight' creates a seriously stinging high-gain voice for lead, no doubt helped along by the 6L6 power tubes for a generally more 'American' feel.

So, yeah, the Tweaker-40 is seriously tweakable, and it's possible to create a twin-channel assault that's either chalk-and-cheese or merely subtly different. With all that said, given that there are dedicated Gain and Volume dials for each channel, it seems weird that a single three-band EQ is left to tailor both sides.

On a more subjective note, we don't feel the cleaner tones have quite the same cobweb-blasting sparkle as those of the Vox Night Train 50, which feels like it's got a bit more poke in reserve.