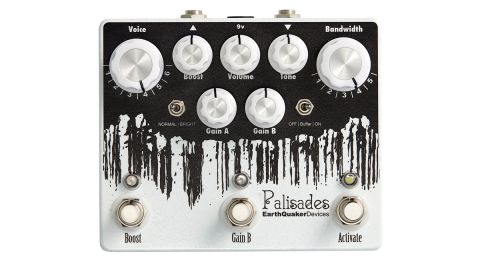 Overdrive sounds to suit many tastes, delivered in a pedal with real practicality for live work.

Just about every boutique pedal maker turns out some sort of Tube Screamer clone, but Earthquaker has taken a radical approach to the task.

While the company may have based its Palisades on the classic TS808, it's built into it a larger array of options than we've so far seen in any overdrive pedal. There's a choice of six clipping voices and five different bandwidth settings (via a pair of rotary switches): 30 variations on the character of the effect before you even start to tweak!

Pedals that change the clipping diodes for different distortion voices are not uncommon, but some do the job with set-and-forget internal DIP switches.

You also get a tone knob and a normal/bright switch. The result is a pedal that lets you dial in a massive range of overdrive tones - not just good impersonations of TS pedals, but much gainier drives verging on distortion and fuzz, as well as transparent boost/overdrive. If you like boost and dirt pedals, you'll find something to suit you here, and the Palisades shines in its switching capability.

While there's a knob for the overall output volume, the Palisades is actually a two- channel pedal with separate gain knobs for channel A and the higher-gain channel B;you can set one up to be dirtier than the other and switch between them with the Gain B footswitch. More variation is provided by a third footswitch, which brings in a boost set by the boost knob: instant access to four different gain levels.

Tube Screamers (and their associated clones) can be a bit of a one-trick pony - something that the Palisades is most definitely not. What this pedal is all about is options: options in dialling exactly the overdrive sound you want, and then options in using that sound live with different degrees of footswitchable gain. Cool.