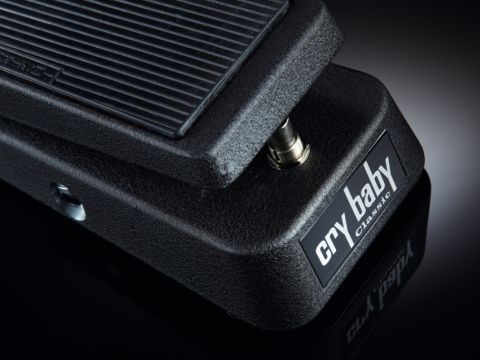 Makes everything sound sexy, slinky and slightly seedy (in a good way).

Cast an eye over the roster of Cry Baby signature pedals and you'll soon get the subtext. This is the wocka-chacka of choice for hairy maniacs (and Buddy Guy).

Endless variants exist, and a couple are cheaper, but we've picked out the Classic GCB-95F for one factor: the Fasel inductor that everybody bangs on about. Produced in Italy in the 60s, then supposedly unavailable, the so-called "legendary" inductor is now back under the bonnet, and Dunlop is playing this innocuous red nubbin as its trump card, dangling the "vocal sweep and lush harmonics" that we'll get from it.

"When you're riffing on powerchords, there's a real muscle and attitude to the sound that's arguably better suited to metal."

There's little to complain about the price, and features-wise the Cry Baby is pretty user-friendly. This pedal is true hardwire, so it shouldn't compromise your raw tone unless you've got a long daisy-chain of pedals, and it scores big-time by enabling either the use of batteries or Dunlop's ECB03 AC adaptor.

Physically, it's solid as a housebrick, and there's a real 'plunge' to the pedal action that bodes well for smooth tone curve.

Ultimately it all comes down to tone though. The Cry Baby is decent enough at the clean singlecoil funk stuff, and does have a lovely old-school quack that's arguably the 'textbook' wah sound.

But where this unit really impresses is on the gain channel with humbuckers. It's hard to describe in scientific terms, but when you're riffing on powerchords, there's a real muscle and attitude to the sound that's arguably better suited to metal, and when you're playing speedy legato solos, it's just a bit fruitier and more vocal, Sandman-style.

It also works a treat when you employ the wah technique much-loved by hard-rock punters like Michael Schenker, and set the rocker halfway for a really scything midrange boost.