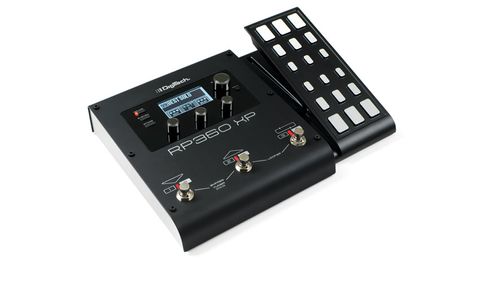 There's a wealth of multi-effects out there, but the RP360 XP has diversity and ease of use on its side.

Multi-effects have received a facelift in recent years: no longer the bastion of bedroom tinkerers and computer programmers, the do-all box has become a serious musical tool, thanks to much-improved digital modelling, interfaces and displays. Now, with the RP360 XP, DigiTech has updated its longstanding RP series with a fresh, streamlined look and a new way of working.

The RP360 XP boasts 162 effects (54 amps, 26 cabinets and 82 stompboxes), including models of classic stompers from the DigiTech and DOD archives, such as the Whammy, FX13 Gonkulator and FX25 Envelope Filter, while the sounds are controlled using three footswitches and the built-in expression pedal.

There's also a 40-second looper, drum machine, and a USB port for recording with your DAW and editing sounds using the sharp-looking Nexus editor and librarian software. In short, there's not much DigiTech's new wonderbox can't do.

Of course, just as important as the model list is the interface. The RP360 XP has all approaches covered with three footswitch modes: preset mode, where footswitches A and B scroll up and down presets, leaving C for looping; bankmode, offering access to three footswitch-assigned presets; and stomp mode, which allows you to switch three effects on or off within a preset.

Plug in, and the RP360 XP's brilliant LCD screen springs to life - you'll have no problems reading patch names or choosing effects. Press the select button to access your signal chain, which consists of wah, compressor, overdrive/distortion, amp/cab, noise gate, EQ, volume, modulation, delay, reverb, expression and LFO (for modulation at a predetermined rate), then use the edit knobs to fine-tune your sound - simple.

Scroll through the factory presets, and you'll find U2, Led Zeppelin, Metallica et al, plus tones from the likes of Minus The Bear, Silversun Pickups and The Black Keys. There's plenty to like when creating your own signal chains, too: the RP360 XP packs a sterling delay array and authentic Lexicon reverbs, as well as some of the finest modulations we've heard from a multi-effects unit.

The dirt models are surprisingly accurate, as well, with fine approximations of the likes of the OCD and Big Muff. And although the amp sounds are hit and miss (the high-gain tones aren't the most dynamic we've heard), the huge range of cabs ensures you can shape tone to your liking - they sit well in a mix, too, and direct USB connectivity simplifies recording.

For complete access to your presets in a gig scenario, you'll probably want to invest in the external FS3X footswitch (£24), but we commend DigiTech for providing a choice of operation modes - not to mention sounds and presets - to suit any player.