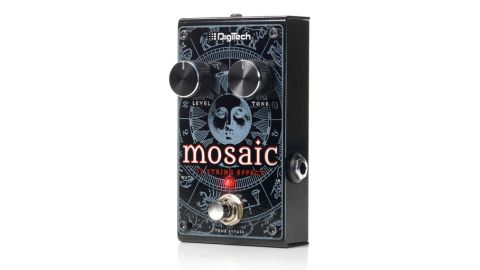 A pedal that some players will have been praying for, providing instant 12-string flavour with no faffing.

If it plays an integral part in your original music, or if you play in a covers band that does a lot of Byrds and Beatles, taking a 12-string guitar to gigs is pretty much a necessity.

However, a different approach is needed for players who favour a little 12-string texture alongside six- string, and since toting a double-neck EDS-1275 isn't for everyone, it's usually down to effects to approximate the sound.

DigiTech might just have made that effects choice a no-brainer with this new Mosaic 12-string pedal.

With processing applied to all strings (rather than just adding an octave to the lower four and doubling up the B and E, like on a physical 12-string), the top two strings, although sounding doubled, do have a certain amount of higher octave there, but that's no problem.

Overall, the jingle-jangle flavour of a 12-string is here in spades, instantly delivered on both single notes and chords with excellent tracking.

The level knob adds these extra notes to your dry sound, while a tone knob adjusts their high frequency content. Between the two, there's plenty of variation from a subtle Nashville tuning 'ghosting', through that typical chime and sparkle, to brash and in your face.

Roger McGuinn won't leave his Ricky at home for this, but the Mosaic represents a great way to get 12-string sounds into a set without swapping guitars.