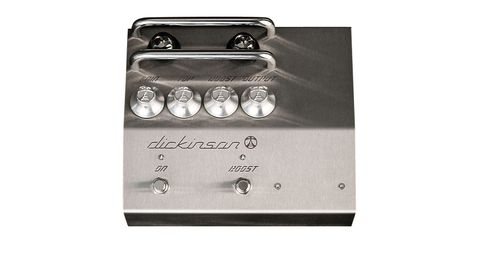 An amp expander/booster of the highest order. Looks cool too, huh?

Originally, D1s were available only with point to point hand-wired circuits; however, increasing demand has prompted Dickinson to make them more efficiently, resulting in this production D1 version.

The production D1 uses a printed circuit board and swaps rotary switches for standard pots, but is otherwise similar, with the same stainless steel casing, custom-milled aluminium knobs and two 12AX7s. There are controls for gain, tone, boost level and output, with a second footswitch for the D1's boost function.

In use, the D1 provides exceptionalclarityandlow-noise performance, combined with some wicked overdrive effects - there's a slight hint of fuzz at higher gain settings, which is instant ZZ Top with a decent Les Paul plugged in.

It's far from cheap, but the D1 has a rare ability to transform a so-so amp into something quite special. Lowernon-boosted settings add valve warmth and dynamics with a particular presence that makes a guitar part sit nicely in a mix, while the overdrive sounds are a match for other top valve products.

If you own a classic non-master valve amp, the D1 could be just the pedal partner you need to add class and versatility.