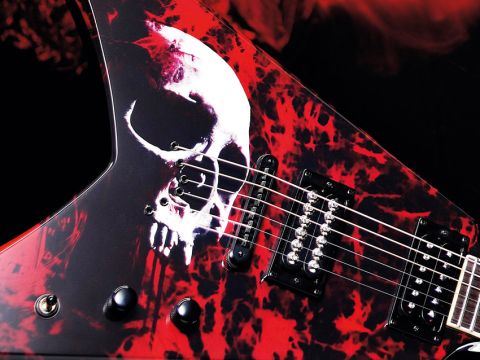 There are a lot of good things to say about this guitar, but it's a serious investment - and a decision to give you a real pain in the skull.

Spare a thought for the folks at the Dean Custom Shop. They probably expected Michael Amott to pick an existing model, doodle a fret inlay, approve a paint sample and pluck a name out of thin air (the process commonly referred to as 'co-designing a signature model').

"I'm a controlling personality," Amott shrugs. "I like to be on top of what I'm playing, so I was 100 per cent involved with this guitar. That's the way it should be."

For all our ranting about superficial signature model fluff, the first impression is how awesome the Tyrant looks. The Bloodstorm graphic is a baby-scaring work of genius (inked by Arch Enemy's album cover artist), the Valknut inlays are pure Viking chic and the mahogany body is a curiously light and well balanced spin on the old V.

Amott claims it gives "the most sustain I've got out of a guitar". We'll see.

The US Tyrant has a neck profile personalised for Amott. Cool, but also a bit illogical: we don't have Amott's hands, so why would it suit us? The C-profile neck of this Korean version is less bespoke, so probably a better all-rounder; it's a blazing surface for lead, but you can slam thrash rhythms on it, too.

There is one quibble. If you're considering this guitar, you're clearly a shredder. If so, don't you crave a Floyd Rose and 24 frets? Artillery-wise, the Tyrant almost feels more 'classic rock'…

Amott isn't denying it; he wants to play "super-heavy, chunky, down-tuned, high-gain riffs" but also "classic hard rock leads". The best of both worlds, then? Kind of.

The Time Capsule pickup delivers a fat, frayed, bottom-heavy roar, bolstered by the inherent darkness of the mahogany, and sustaining longer than the weight suggests. Amott's signature bridge pickup is great, too, with a swaggering Zeppelin tonality, but it's possible the same shredders who complained about the 22 frets and hardtail format will crave more top end slice for quicksilver parts.

Should Amott have gone for an EMG 81? Should we expect one, given we're paying nearly a grand?

The Tyrant is a damn good guitar. Toneful, playable and well put together, it's a classy choice for hard, fast rockers, even if it's missing some prescribed 'shred' features.

But we can't ignore that price. This Tyrant seems thrifty compared to the US version (£3,064 for broadly the same spec) and sizes up well to the China-built X (£349, with a butchered spec). Remove it from this context, though, and £999 seems pricey for a Korean-made electric given the glut of killer Vs on the market.