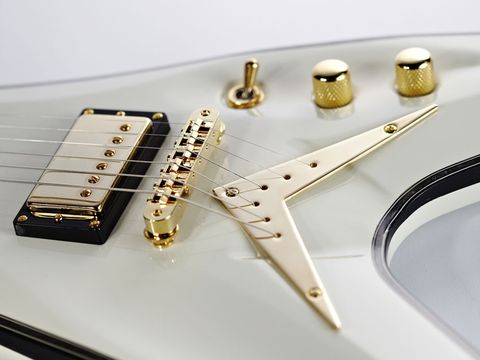 Looks can be deceiving, but try to look past the dressage; the Cavallo is a thoroughbred workhorse in a show pony's body.

The Cavallo has the look of hot-rodded Americana, and guitar-wise it's exactly that. Take your standard Gibson Flying V, stretch the wings out, carve a piece of wood in homage to the tail-end of a circa-'66 Lincoln Futura Batmobile, and affix Grover kidney bean tuners: et voila, a headstock. On its website, DBZ promises a coil-tap, but the example we have here is fitted with stock DBZB and DBZ5 humbuckers, and we're told that coil-taps will not be appearing on any Cavallo models for the foreseeable future.

If you have a browse of the secondhand market, you may well stumble on an sample that still has this feature, but, otherwise, you'll just be getting a three-way selector, volume and tone pots, and a string- through tune-o-matic bridge. We'd have loved a good set of single-coil tones, but as it is, the Cavallo still has plenty of talking points.

It looks savagely retro, aggressive and angularly awkward enough to preclude playing in a seated position - the wings are too close together to jam it in and get comfy. Unusually, the neck has a soft-V profile, more commonly associated with classic Fender than a hot-rod metal axe. But, really, give it a try anyway: it's brilliant in use, making for easy barre chords and flattening out nicely in the upper registers.

For all the Cavallo's ergonomic disregard, it's lightweight owing to some out-there contouring, ridiculously playable, and has one of the fastest and most forgiving necks we've played in a long time. Any intermediate shredders looking to lose the L-plates will be impressed. And the sustain? The Cavallo can hold a note longer than Bill Withers.

For a guitar so ostentatiously appointed in white, with gold hardware and pearloid binding, it gently rebukes its own outlandish appearance when it comes to the pickups, with enough heat, depth and sparkle to silence our squawking about upgrading to a pair of Seymour Duncans.

Indeed, compared to the Seymour Duncan SH-4-appointed Jackson RR5 (a clear competitor), the Cavallo has a similarly pugnacious midrange - a real toothy tone that's perfect for rock and metal, while cleaning up brilliantly for clean or crunchy blues bends.