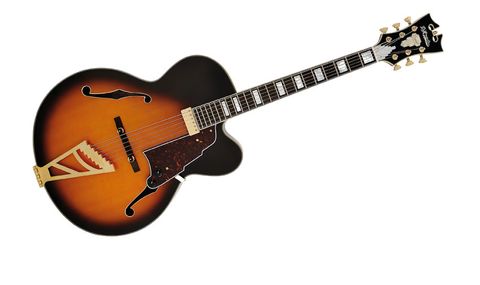 A very competent old-school jazz box that evokes a bygone age and the memory of the great John D'Angelico.

John D'Angelico is revered as the foremost archtop guitar maker of the jazz age. Working with one or two assistants (including, latterly, James D'Aquisto), he made 1,164 archtops under his own name from 1932 until his untimely death, aged 59 in 1964.

His early guitars cloned Gibson's L-5 but soon developed a unique, often highly ornamented style embodied by his two most famous designs, the Excel and the New Yorker. The new D'Angelico company is offering a range of all-laminate Korean-made guitars, including this instrument: the EXL-1.

Based on the original Excel cutaway, the EXL-1 is a big-bodied beauty, a 432mm (17.5-inch) wide archtop with a side depth of 79.5mm. The neck feels pleasantly old-school with a subtly asymmetric-feeling D profile; the EX-SS's neck has a similar character. Depth-wise, it moves from 22mm at the 1st fret out to 25mm by the 9th.

Fretwork is extremely tidy, and although the spec says ebony, the 'board itself really does appear to be rosewood. The headstock is huge, pretty much 210mm in length from behind the nicely cut bone nut to the open tip, which features the distinctive inset metal 'finial'. Along with the polished aluminium truss rod cover, this finial is clearly inspired by the architecture of New York's skyline, adding opulence aplenty. Despite the size of the 'head, it's actually pretty trim in depth ( just 13mm).

Then again, the Stairstep tailpiece also seems huge and perfectly matched by the Grover tuners with their own 'three-step' buttons. With such a splay on the strings, especially the centre two, a little more work on the nut grooves would help. At the moment, both the G and especially the D strings are sticking.

Typically, we have a two-piece wooden bridge; the rather sharp-edged but compensated top section is height adjustable via two thumbwheels. It isn't pinned in place and it took us a fair while to get acceptable intonation by manhandling it while plugged into a Peterson Strobe tuner. Also, the string spacing could be widened slightly - the strings sit well inside the fingerboard edges at the top end and just inside the spread of the pickup's adjustable pole pieces.

Kent Armstrong's pickups are revered in jazz circles, and this thin-depth Alnico neck humbucker is side- mounted to the pickguard - it doesn't attach to the neck or top of the guitar - which also holds the volume and tone controls. Only the output jack is actually fixed to the guitar's side.

As an acoustic archtop, the EXL-1 doesn't exactly kick out a huge volume level, but it's immediately characterful with an almost clipped and very direct tonality and short-ish yet sufficient sustain.

Its midrange push certainly cuts through while playing with another acoustic guitarist, although we'd probably opt to swap the roundwounds (with wound third) for flatwounds for a more authentic sound.

Plugged in, the EXL-1 adopts a more stately tonality. With both volume and tone up full, there's almost too much crispness - but reduce the volume and knock back the tone and a beautiful, clear bell-like sound emerges that won't get you thrown out of any jazz gig. There isn't a huge variety of sounds, of course, but enough to go from older, darker jazz voices to more contemporary clarity.

Priced upwards of $30,000, few of us will ever get to play a real D'Angelico original, let alone own one, but this guitar has what so many centre-blocked and solid electrics don't have - and that's genuine tonal character.

The EXL-1 recalls a real bygone age when the jazz guitarist ruled the roost, and if that's where you set your sights, it's one of the best of its type we've encountered at this price.