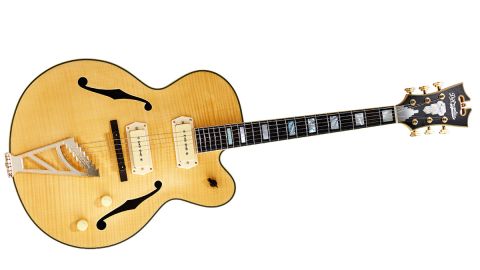 While the archtop hollowbody and its 'modernised' centre-blocked thinline have moved in and out of fashion over the years, in today's over-filled market where every stylistic niche is seemingly covered, the once-called 'jazzbox' seems nicely anchored with numerous mainstream brands offering a pretty wide choice of style and price.

D'Angelico's guitars are manufactured in Korea - as are Guild's Newark St Collection - and they typify that country of origin, coming with a price tag that sits between lower-cost Chinese and Indonesian archtops and semis from the likes of Gretsch and Epiphone, and the higher-priced USA-made Gibsons or harder-to-find Japanese makes such as Yamaha.

Originally conceived in the jazz age by John D'Angelico, these guitars have been reissued on occasion over the years. Then, back in 2011, the brand was kick-started again and today has quite serious presence and a number of top-line users, including Bob Weir, Susan Tedeschi and Brad Whitford, not to mention Lake Street Dive's Mike 'McDuck' Olson.

Our sumptuous EX-59 Standard comes in at 17 inches wide and three inches deep (at the rim), and was apparently originally designed by John D'Angelico in 1959. We'll take the new D'Angelico company's word for that, although in the excellent tomeof the life and work of John D'Angelico, Acquired Of The Angels by Paul William Schmidt, we learn that D'Angelico favoured the simple nature of the humble acoustic.

In the book, James D'Aquisto - who had worked with D'Angelico and continued building as his 'successor' after D'Angelico's death - states: "John didn't care at all about pickups and he didn't make a guitar designed for a pickup, he just made an acoustic guitar. For players that wanted an electric guitar, he braced and carved the instrument to accommodate the pickups."

In many ways, the actual heritage is a little irrelevant. D'Angelico made his instruments from solid woods, not laminates like this 'Excel' EX-59. But there's still plenty of D'Angelico-isms on display here. Take that large headstock, which is some 210mm in length from behind the bone nut (which, incidentally, is left with over-sharp edges). Then there's the open tip that features the distinctive inset metal 'finial', which adds opulence aplenty and is clearly inspired by the architecture of New York's skyline, along with the polished aluminium truss rod cover.

Despite the size of the head, it's actually pretty trim in depth at 13mm, probably out of necessity. Again, it seems the architecture of Manhattan has influenced the 'Stairstep' tailpiece, which also seems oversized, but is matched by the Grover Imperial tuners with their own 'stepped' buttons. Hardware, as you'd expect is all gold-plated.

The EX-59 may look like a museum piece today, but it would hardly have been cutting edge even back in 1959. Rock 'n' roll had exploded, the solidbody electric guitar was gaining popularity, and the jazz age was nearing its end. Meanwhile, over at Gibson, Ted McCarty and his team had bridged the gap between the old and new with the ES-335 - which is where our EX-DC comes in.

D'Angelico is one of many, many brands who has 'borrowed' from the ES-335 over the years and we doubt it will be the last. The EX-DC has zero D'Angelico heritage - aside from the headstock, that is, which gives the guitar a rather old-fashioned appearance. Its bridge and tailpiece are standard fare (though a Stairstep tailpiece version is offered, see specs on p103), and like the ES-335, of course, we have a Gibson scale length along with dual humbuckers (by Kent Armstrong) and the classic four-control layout.

If you're into detuned metal styles, you probably won't have read this far, but outside of that heavily-gained genre, either one - or both - of these guitars is hugely usable for the modern player. If your stylistic roots lie in the jazz world with players such as Grant Green and Kenny Burrell, you'll 'get' the EX-59 immediately.

Despite its size and depth (it's pretty weighty, too), it feels so 'right' played seated - for practice or performance - with more than enough acoustic volume for the former and probably enough to put a mic in front of it to capture an earlier acoustic archtop vibe on your recordings. The unpinned wooden bridge seems to help a shorter, more clipped sustain and 'woodiness'.

The cutaway certainly extends the range, though this is far from a high-fret noodler. Those of us who are used to Gibson's four- control layout might feel shortchanged by the single master volume and tone controls, and the rotary pickup switch is not as fast in use compared with a toggle - but, again, for the style it all suits.

Plugged in, we get a good idea of the transition from the hollowbody (with just dual top braces) to the thinline with its solid maple centre block and the single-coil P-90, to the humbucker. The EX-59 aims for that shorter sustaining 'plunk' of an archtop hollowbody, which is perfectly suited to these P-90s.

In neck position and set clean, we're back in the jazz age with the mix providing a little texture and added clarity. The bridge pickup alone sounds a little underpowered as supplied, but if older jazzier and bluesier styles are your bag, you perhaps need to reset that to balance with the neck pickup as we only have a single master volume control. Voiced on its own, however, the bridge pickup works well, especially for recording, to create a gritty, slightly crunchy voice - but, as ever, good luck with the feedback!