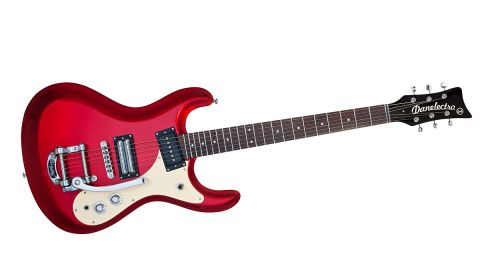 A superb reworking of a classic let down only by its price tag.

Unlike most of its modern guitars, the new Danelectro '64 is not a reissue pulled from the iconic brand's back catalogue.

Instead, it's a 'tribute' to cult Californian guitar maker, Mosrite. Founded in 1956 by luthier Semie Moseley, Mosrite is best known for its association with US instrumental legends, The Ventures, and punk rhythm machine Johnny Ramone - Kurt Cobain was a fan, too.

The Mosrite design is a distinctive one. It's kind of like an upside-down Strat, with the longer horn at the bottom - and if it looks familiar, Dano has previously used that design quirk on its Hodad models.

Your classic Dano is built around a light hardwood frame capped with Masonite panels. Not this guy.

The '64 is a proper solidbody guitar fashioned from agathis - a lightweight timber with a decent helping of sustain. The bridge-position lipstick humbucker is the most obvious Danelectro influence on the '64, while the neck single coil is classic Mosrite.

The wiring loom consists of a master volume, master tone and a three-way pickup selector toggle switch - that tone knob is a push/pull job that splits the bridge pickup for a single-coil sound as well. In other news, the licensed Bigsby vibrato is paired with a tune-o-matic bridge with six individual roller saddles, and we love the metal control knobs: they look like little flying saucers. The '64 outline is completed by a bolt-on maple neck teamed with a rosewood 'board and 22 medium frets.

The aluminium top nut is another classic Dano feature, and it's aided in its efforts to keep the strings at the right height by a zero fret.

Mosrite guitars generally have ultra-skinny necks, which some players find tough to live with. The '64 has more meat on its bones: a comfortable medium C shape that has become a trademark of Dano reissues. The 635mm (25-inch) scale length lends the guitar plenty of twang in all positions on the selector switch: if you play rockabilly, country, indie, surf, old Johnny Cash stuff, you just found your sound.

Engage some overdrive and you'll find the '64 is a damn good punk and rock guitar, too. Jimmy Page did some fine work with lipstick pickups in the early days of Led Zeppelin and the bridge unit works great for classic rock stuff in full and split modes. You can pull a very acceptable Blitzkrieg Bop from the split coil, too. The neck pickup, meanwhile, is for the blues nuts. It's warm and woody played clean, while a pinch of overdrive reveals a sweet sustain.

Reissue Danelectros have always punched above their price tags in our opinion, but we're not so sure about the '64. Granted, it's a solid piece of kit, well thought-out and executed - good-looking, too. But even if street prices are lower, a grand... really? We began testing the '64 before we received pricing information, and assumed that the guitar would cost around £650. At that price point, we think it would be pretty hard to resist.