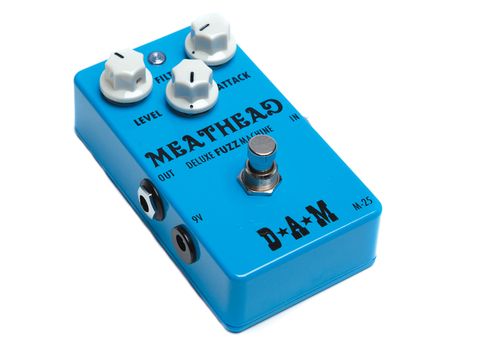 In a time where anyone with a soldering iron and a dream can spell 'boutique', we applaud D*A*M for making things more interesting.

Surely one of the best things about being a pedal builder is getting to name your creation. It's a practice built on a firm tradition of smutty innuendo and delicious punnery, and we like the first part of D*A*M's fuzz pedal moniker.

However, the tradition of Muffs, Balls and Fingers has escaped this one. Instead, it shares its name with a motorway.

Not really. You may remember us featuring another version of the Meathead, when the M-13 delivered the fuzz establishment's arse on a plate. We couldn't help wondering what it'd be like with a couple of extra controls, though.

The M-25 (or Meathead Deluxe) adds Filter and Attack to your arsenal, while the Level serves the same function as the Dirt control with its little brother. The Attack control acts as your main clipping control, and it's surprisingly tame until you hit the positions at three o'clock and beyond. Filter adds bass and extra clipping into the mix, while Level controls the output.

At first the controls can be tricky as there are multiple ways of achieving the same sound. However, with a little tweaking, we managed to coax out loads of different tones, from smooth blues leads to a vintage punk dirge to a full-on woolly grind. The M-25 offers extra tweakability that's lacking from the standard version - even if it does complicate things.