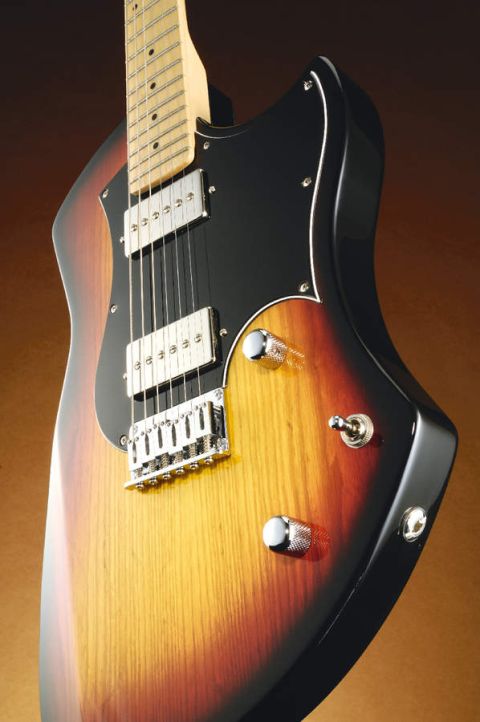 For less than the price of some production line, big-name competition, the Transitone is a pro-quality original design loaded with options

Campbell American Guitars is based in Massachusetts, with its factory facility in Rhode Island and a workforce that counts luthiers from the pre-Fender-owned Guild company within its number.

Although it isn't exactly a household name on either side of the pond, the brand is celebrated amongst Stateside guitar nuts for providing a high quality-per-dollar ratio and an abundance of custom options.

The first thing that strikes you about this Transitone model is almost guaranteed to be its unusual outline. However, fans of former Be Bop Deluxe guitarist Bill Nelson may recognise the shape from Campbell's Nelsonic Bill Nelson Signature model.

While that instrument is a little more ostentatious with its vibrato bridge and gold hardware, the Transitone model that greets us as we pop open the latches on its compact hard shell case has a combination of a sunburst finish and a three-ply black scratchplate that reminds us a little of seventies Fenders. Also, unlike the Nelsonic's slab construction, the standard Transitone here has a Strat-style forearm contour.

Although the body's stylings will inevitably polarise opinion, we find the Transitone's strange collision between Fender and Gibson chic rather endearing. At the other end of the neck, the headstock is a three-a-side affair with a bite out of its outline that echoes the body's single cutaway.

The guitar's nitro-cellulose three-tone sunburst finish is perfectly-applied to the alder body - a variety of other tonewoods from the mundane to the exotic are available - which is again reminiscent of classic Fender.

Most players' relationship with a guitar is heavily influenced by the feel of the neck, and the Transitone is particularly noteworthy in this area. One of the first things that we notice when subjecting the guitar to a casual strum is that the maple fingerboard, like the body, has been given a coat of nitro-cellulose lacquer, but the rest of the neck has just a thin, slightly sticky satin finish; not quite down to the bare wood, but certainly close.

If you are used to a thick coat of lacquer, this may initially feel a little disconcerting, but players familiar with Music Man's oiled approach to neck finishing will know what kind of feel to expect.

However, most other Music Man comparisons end there. Where a Music Man electric guitar feels snug and compact, the Transitone's Fender-like 648mm (25.5-inch) scale length and relatively narrow body means that, when played in a sitting position, your fretting hand feels that it has a travel a little further than usual to play in the first position. Happily, it's something that we quickly get used to, and it doesn't impair our enjoyment of a guitar that turns out to be gloriously easy to play.

The bolt-on maple neck's 318mm (12.5-inch) radius contributes to a very flat, wide feeling 'D'-shape neck profile that, in combination with 22 frets on the jumbo side of medium-jumbo and a low action, finds our fingers gliding and bouncing across the fretboard with consummate ease. We're usually much rustier than this! If you like your guitars to fight back a little, then we'd recommend a higher string gauge than the factory-fitted 10-46 set, which allows big country-style bends with minimal effort.

Although much of the Transitone's aesthetic screams retro, its neck actually has quite a modern feel. This might wrong foot you initially but perseverance is advised. The 'this guitar plays itself' platitude is repeated ad infinitum, so we'll resist the temptation to go into the realms of hyperbole, but the Transitone scores highly in the playability stakes. If you prefer an ebony or rosewood 'board then these options are available without additional cost.

Action tweaks prove easy thanks to a heavy-duty Gotoh hardtail bridge with Stratocaster-style saddles, while non-locking Sperzel sealed tuners take care of the other end of the strings and keep proceedings very stable indeed. Other hardware and electronics are similarly well-chosen, with a heavy-duty three-way toggle pickup selector and chunky chrome volume and tone knobs controlling a pair of Seymour Duncan Phat Cat humbucker-sized P-90 pickups.

We'll admit to being rather smitten on our previous encounters with the excellent Phat Cat units. Originally built in the Seymour Duncan Custom Shop, Phat Cats were a collaboration between Hamer's Jol Dantzig and Seymour Duncan initially used exclusively on the Hamer Newport series of semi-hollowbody electrics. Phat Cats have been available as a regular production line pickup since 2004 and remain an extremely popular retrofit. If humbuckers are your thang, they are available without extra expense, and when equipped with 'buckers the Transitone's tone pot also acts as a pull/push coil splitter as standard.

Strapped on, the Transitone tends to hang a little headstock heavy, but this can be remedied by relocating the upper strap button position to somewhere behind the heel; this writer had exactly the same issue with a Non-Reverse Firebird he once owned - and stupidly sold, but that's another story - and the same trick rectified the balance problem and made for a playing angle that was much more comfortable for the fretting hand.

The Transitone has a lively, balanced, resonant acoustic voice that bodes well for its amplified tonality, and it doesn't disappoint. Seymour Duncan's Phat Cat P-90s are wonderful units that allow much of the character of the instrument to be translated into the amplified sound, so it's no surprise that in combination with a bolt-on maple neck and alder body, the Transitone is evocative of a good Telecaster with extra hair and girth. If you want something closer to a P90-loaded Gibson, then Campbell can easily cater for you with a mahogany body and rosewood fretboard.

Back to the guitar in hand though, and it's all-too-easy to forget just what a versatile pickup the P-90 is, and these Phat Cats are some of the best. With judicious use of the guitar's volume and tone controls and a sympathetic amp sound it's possible to get the Transitone to deliver authentic voices for rootsy Americana, stinging blues, sixties pop, heavy alternative rock, garage punk and almost anything short of modern metal. In a studio context, try double-tracking dirty rock rhythm parts with the hum-cancelling twin pickup setting; it's a big, ballsy sound for chords.

We really like this Transitone. Clearly, the outline is never going to be to everyone's taste, but in terms of sheer playability and pro-quality spec, build and dependability, Campbell guitars come highly recommended. Considering the amount of custom options that are available, it's possible to tweak the basic design to suit your needs and still keep the price competitive when compared with some of the big mass-produced American brands who just don't have the sheer number of options available.

The Transitone's neck may feel a little too flat and modern for those of a more vintage bent, but the old cliché 'don't knock it until you've tried it' is relevant here. It really does play very well indeed. If the shape is just too out-there for you, check out Campbell's Precix, a compact, double cutaway design with a similar array of custom options.