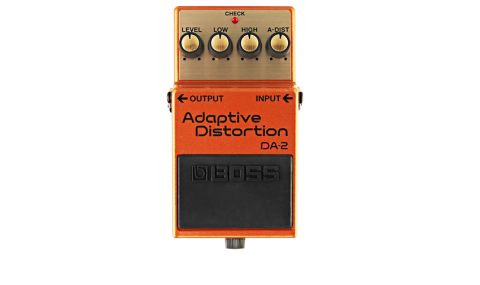 A pedal for tightly focused distortion.

The idea behind Boss new compact stompbox, the DA-2 Adaptive Distortion, is to give you distortion tones determined by wherever you play on the guitar neck, in effect giving you the ideal tone for each register.

Knobbage is pretty much the same as any distortion pedal, with controls for output level, distortion, and low and high EQ.

It seems conventional on the surface, but Boss says that it employs multiple distortion processors to overcome some of the inherent drawbacks of 'normal' distortion pedals, which process the entire guitar signal with one effect.

The aim of the pedal seems to be to lose mush or muddiness where it's not needed, and to promote a distortion sound with plenty of clarity and punch. Sensitive to dynamics, playing through the DA-2 feels a little different to using a conventional analogue diode-clipping pedal, and it offers its distortion over a wide range, from a mild crunch overdrive through to a ferocious dirtfest that could suit metallers.

The two tone knobs are wide-ranging, and combine to put the sound where you need it in the frequency spectrum, but they're also able to make it really extreme - the top-end gets particularly fizzy and vicious.

Overall, though, the sound is tight and well defined wherever you play on the neck, with individual notes making their presence felt within a chord, low-string riffs possessing real weight and dusty end leads cutting through as they should.