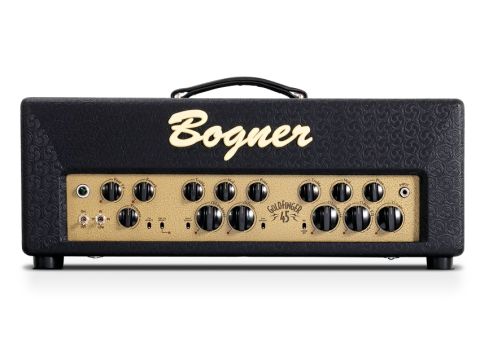 Reinhold Bogner is one of a handful of elite amp designers who has profoundly influenced the electric guitar's sonic development during the last three decades.

From his early work with Van Halen and Steve Vai, which led to the original monster three-channel Ecstasy heads, Bogner amps have always been lauded for their tone and build quality. A recent tie-up with Line 6 produced the Alchemist range while Bogner continues to develop his own hand-made products at his Hollywood base. As well as the Goldfinger 45 tested here, we also tried out the 112B Barcelona combo from the International range.

The Goldfinger 45 is a two-channel head with a hefty cabinet covered in Bogner's custom comet-pattern embossed vinyl and a chassis sprayed in a dull gold spatter-paint effect that extends to the front and rear panels.

Its electronics are contained inside a heavy steel open-ended tray chassis, folded to form the front and rear panels. There are four main PCBs, holding the front and rear panel components along with all the valve bases. There's real quality in the electronics department, with double thickness circuit boards and heavier than normal copper plating. As you'd expect, all the components are of the highest calibre, giving a look and feel more often found on top-dollar hi-fi products than guitar amps.

The Goldfinger 45 has some typically off-the-wall features that need at least one read of the manual before you can let rip. There are two channels: the Alpha clean channel and Omega overdrive channel. Alpha features the regular gain, volume and three-band EQ set-up but also has two bright switches linked to the channel gain and volume controls, both switches having a different overall effect on the way the amp responds.

The Omega channel has the same rotary controls with the addition of a sixth knob called gain EQ which sets the feel of the channel, going from brighter edgier tones to warmer and fatter sounds as the knob turns from left to right. There's also a two-position mode switch that changes the channel's character from a high-gain '80s rock tone to a medium gain, late '60s/early '70s classic rock tone.

There are two effects loops: one in the usual place between the preamp and power amp, configurable for series or parallel operation, with a stompbox/rack level switch and a return gain control. It can be switched in or out from the supplied footswitch or from a pushbutton on the rear panel.

There's also a front panel mix control, which functions as a volume control when the loop is in series mode. The second 'Pre-Efx' loop is intended for effects that you'd normally put between the guitar and amp, such as a wah, distortion or compressor.

It's footswitchable, with separate buttons for both channels and a rear panel gain control that functions as a boost when no pedals are plugged in. With the loop deactivated the guitar signal behaves just as it would if connected directly to the amp by a lead: a clever trick.

The two remaining front panel rotaries are a master presence control, and a level control for the Goldfinger's built-in spring reverb. Its output stage is a quartet of 6V6s that can be switched down from 45 watts to nine watts in two steps, using the standby switch's high and low power options and a rear panel half-power switch that turns off one pair of valves.

There's also a handy external bias adjuster with test points, a trio of speaker outlets with switchable impedance and a heavy-duty locking DIN socket for the supplied five-button foot controller. This changes channels, toggles the Pre-Efx loop/boost functions separately for both channels, and switches the Post-Efx loop and reverb.

The Goldfinger produces very little mains hum and just a tiny background hiss when powered up. Its clean channel has a sweet treble response, smooth mid-range and a tight, focused bass that flatters single-coils and humbuckers.

Overly warm guitars can easily be lifted higher in the mix using either of this channel's bright switches: post-bright is more upfront, pre-bright is subtler. As with most bright switch functions, when you turn up the relevant gain or volume control, the effect is less noticeable.

Both a stock Les Paul Standard and a Fender Custom Shop Nocaster were easy to dial in. The clean channel's gain control has just the right amount of drive on tap to take either guitar from fat spacious cleans with plenty of headroom into a mild overdrive that's great for blues or country, with plenty of range in between to cover those elusive, almost overdriven chiming effects.

The Omega channel's two date-related modes aren't footswitchable, which would give it almost three-channel operation. Nobody does that woody mid-range 'Plexi' thump quite as well as Bogner, and wound up to a decent level it does Bluesbreakers-era Clapton (with a Les Paul) or early Led Zeppelin (with a Telecaster).

As well as being fat and warm when used clean, it produces some edgy lo-fi tones in this mode too. Swap to the '80s high-gain voicing and you can get very close to those classic Van Halen tones. Both the Goldfinger's effects loops work really well too - you can cover pretty much any requirement.

Built to exceptionally high standards and aimed primarily at professional users or well-heeled amateurs, this amp won't disappoint. The price is fairly reasonable too - by Bogner standards.

With its clever effects loops the Goldfinger can easily be the cornerstone of a complex pro-standard rig, or it can work just as well with a simpler set-up. While that can be used in a number of different ways, there are other models in the International range aimed at other niches. We'd recommend you to check them all out.