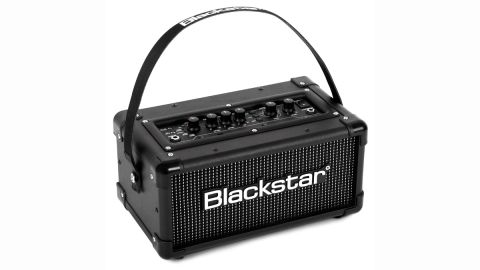 If you've got the speakers, this could very well be your next head!

With its accessible ID:Core range, Blackstar has done more than most manufacturers to put serious tone and digital effects into the hands of many beginners, along with an entire web community of enthusiastic users who want to share sounds, patches and more.

The web portal and Insider editing software designed for the ID plays a big part, but the amps themselves are the key: a trio of very portable combos with stereo speakers. Now, there's a new addition in the shape of the ID:Core Stereo 40 head.

Essentially, the 40H is a Stereo 40 combo without the speakers, aimed at players looking for a more substantial live sound.

The head's controls are identical to the combo, with a single guitar input feeding a digital preamp. There's a six-position voice switch that provides two clean, two crunch and two lead sounds, plus gain, volume and EQ, using Blackstar's patented ISF (Infinite Shape Feature), which varies the EQ from Brit to USA and back.

Effects comprise delay, modulation and reverb, with four choices for each type, which can also be tweaked from the Insider app. The ID:Core amp can either be run in 'what you see is what you get' manual mode, or you can save and store up to six patches, which recall amp voice, gain and effects settings, but not master volume.

The Core's sounds are excellent, with very little background noise, even at higher gain settings. You have a choice of airy, hi-fi or fatvintage cleans, vintage low gain or modern high-gain crunch, and insane or totally mental lead voices.

Thanks to the clever ISF control, it takes no time at all to dial in any guitar - from lightweight single coils to extra muddy humbuckers, the Core can handle it and provide really usable tone in a snap. Then it's just a case of adding a little seasoning with your favourite effects and serve.

The Stereo 40 head's dual speaker outputs will connect to most speaker cabs without issue, though you should use identical speakers on both sides for the best performance. We like the extra width that comes from using the stereo effects; it makes everything seem louder and bigger without straining the dual-20-watt power amp. Using a pair of 1x12 cabs, there's volume enough to use it for rehearsals, or even small gigs.

Small heads are all the rage at the moment - some are simple and straightforward, while others pile in as many features as possible at the expense of the one thing that we guitar players all seek at any level: great tone.

Happily, the ID:Core 40 head seems to get the best of both worlds; it's easy to use, and you can get highly usable sounds happening in a few minutes. For the miserly sum of just under 130 quid, its a lot of bang for your buck.