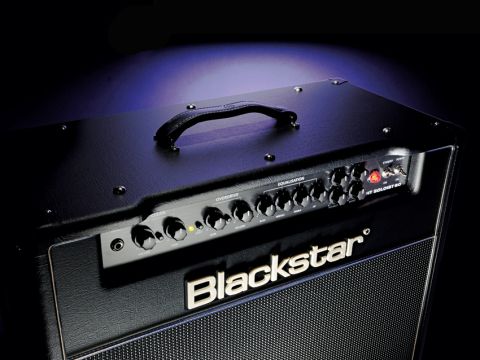 We think the HT Soloist 60 is the best amp in the range - put it at the top of your 'must try' list.

When you think that most of the well- known amp brands we use today have taken at least 30 years to establish themselves, it's quite an achievement for Blackstar to have gone from literally nothing to being a serious worldwide presence with an enviable list of artist users in less than a decade.

Until, that is, you remember the talent, technical expertise and single-minded dedication that's behind the badge. We've been consistently impressed with all the products Blackstar has brought to market so far, and its latest HT Venue range is no exception.

We've inspected all of it bar one amp, so now it's the turn of what might be the best-selling model of the lot, the HT Soloist 60 combo.

The Soloist offers the same smart, conventional styling as the rest of the HT range, with a subtle gold weave grille cloth accented by gold piping.

If you think that combos are supposed to be compact, the Soloist's large cabinet might cause you to think again - it's large, deep and, thanks to a purposefully large pair of transformers, very heavy.

However, to Blackstar's credit, we have a pair of recessed grips on the sides and fitted snap-in caster plates underneath, helping to make the amp as portable as it can be.

Inside the steel open-ended chassis, one large PCB holds most of the circuitry, including the front panel controls, preamp and power amp valve bases, and a variety of conventional and surface-mount components. Another board caters for the rear panel sockets and mains input.

Everything looks neat, clean and robust - easily capable of standing up to a tough gigging life. The PCB valve bases mean all the valves are quite deeply recessed, making them tricky to remove and replace in a hurry, but this apart the Soloist is typical of the pragmatic design philosophy Blackstar is known for - everything has an immediately usable function.

The Soloist is a proper two-channel design, with volumeand tone controls for its clean channel and a voice switch, which accesses two different modes called modern and boutique.

In modern mode, the amp has more headroom and a tighter bass response, while the power stage runs in Class AB. Switch to boutique clean and the power amp is reconfigured to run in Class A with less headroom, while the emphasis is more on mids and highs.

The lead channel has a similar voice switch that alters the negative feedback, giving a tight controlled crunch or a livelier, looser response.

There are separate gain and master controls, with a three-band EQ and Blackstar's unique ISF control, which progressively changes the EQ response characteristics from UK to USA.

Four knobs on the far right include presence, reverb and overall volume controls; there's also a footswitchable boost with its own level control and a switch to add more mid-range to the overdrive channel in boost mode.

On the rear panel, you'll find a trio of speaker outlets, a cabinet-emulated output with two EQ settings to approximate the sound of 1 x 12 or 4 x 12 enclosures, a reverb tone switch and a series effects loop with switchable levels.

There's also a mode switch for the supplied four-button foot controller, which lets you either boost the clean or overdrive channels independently, or switch to the boosted overdrive channel automatically, essentially turning the Soloist into a three-channel amp.

All in, it's a versatile package with a lot of interesting features, so how does it sound?

As with the other models in the HT Venue range, the Soloist 60 is very easy to dial-in. Despite the wealth of features onboard we're ready to go with some great tones in less than two minutes.

The ISF feature is very conventional spring reverb, while the dark setting has the warmer feel of a more expensive studio effect.

The bass response is generally smooth, but well-defined and instantly noticeable - this amp really kicks if you turn it up.

As with every other Blackstar we've played, the high-frequency fizz that afflicts many high- performance amps is totally absent, making higher volume use a real pleasure rather than an endurance test - for player and audience alike.

Fire up the boost function, then flip the switch marked 'body' to add more mid-range, and the Soloist produces that thick, creamy, singing sustain that Blackstar does so well.

Not surprisingly, the Soloist turns out to be one very versatile combo. Some models in the range have fewer functions, others have more; overall, we think the Soloist has the best and most usable balance of features at is price point, making it very tempting in this extremely competitive section of the market.

Our only criticism is that if you favour a combo format for convenience, it's not the most portable 1 x 12 out there. The upside is that the outsize cabinet really improves the bass response.

The Soloist can handle practically any musical genre you want to throw at it, from jazz to thrash metal, although it really shines when used for Brit-influenced classic rock stuff.

While the price may not be in the pro league, the build, sound and looks wouldn't be out of place on any stage. We think this makes the Soloist an ideal choice for the working players, giving it the edge over most of its competition. We think you're going to like it.