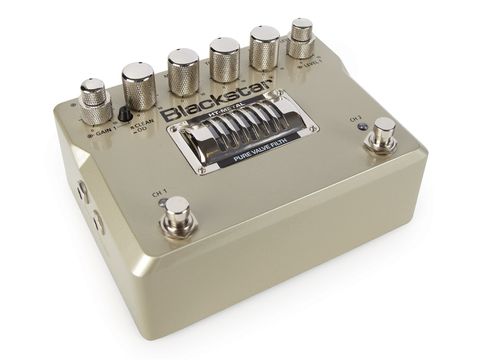 Truly one of the finest distortion pedals we've ever stepped on.

When we were sent this extreme gain pedal from Blackstar, we took precautions. Upon opening the box we borrowed safety goggles; pets were ushered outdoors; tarp was laid down.

Blackstar means business with the HT-METAL, capitalising on endorsements with dudes such as black metal titan Ihsahn and Dimmu Borgir's Silenoz. All signs point to some thermonuclear gain action.

The HT-METAL is a two-channel/three-mode distortion pedal. There are two channels on available with this ferocious offering, but you'll find that Channel One has a Clean/OD switch that enables you to use the pedal as a boost in Clean mode and dial in some hot bite as you turn the gain clockwise.

Reminiscent of the limited Gus G signature HT-BLACKFIRE distortion that we fell in love with last year, the HT-METAL now supersedes it as Blackstar's official entry for the title of The Ultimate Heavy Metal Distortion Pedal.

The control panel is laid out like a Blackstar amp with Gain and Level, Bass, Middle and Treble, plus the patented Infinite Shape Feature (ISF). The ISF control works like a Trans-Atlantic tone translator, changing the character of your tone from a tight American sound when turned fully counter clockwise to a mid-rich British tone when fully clockwise.

Punching in channel one's Clean mode is like sticking your tone on a hot radiator, adding layers of warmth and just a little break-up when the gain is cranked. Blues players may be surprised that a pedal built for blood and thunder can also do sweet.

Channel one's OD mode is all about throaty, expressive crunch and, depending on where you set the ISF knob, you can even get some nice 'n' sleazy American rock tones or a blue-collar AC/DC bark.

Navigate your way to the high-gain stages of channel two and besides realising that the HT-METAL's USP is its ability to turn your signal into a gnawing musical chainsaw, you get the feeling that Blackstar is actually underselling this - the HT-METAL is more than just a pedal for musical extremists. Indeed, its comprehensive sweep of not just useable but great, inspiring tones should be experienced by all players.

Sure, for many it will be difficult to look past the moody exterior and the extremity of channel two. Sheesh, there is more gain here than you would ever really need (enough to saturate your tone) and it's obviously perfect for metal.

If your wardrobe is 100 per cent black and you use words such as 'necro' and 'brutal' to describe your mum's cooking, this one's for you. But really, this is so good we'd like to think there's something for everyone here.