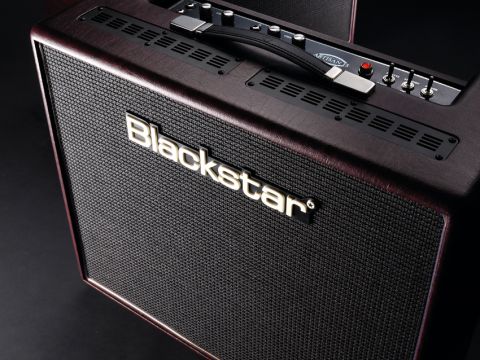 If you are looking for a high-quality, low-powered valve combo that's up there with the very finest American boutique amps, don't hesitate to audition the A15.

Formed by two of the most influential amp designers in the UK, Blackstar Amplification has been working for a long time to launch its products and we've been straining at the leash to get our hands on its hand-wired Artisan range. Well the wait is now over...

Designed in Northampton and made in Korea, the Blackstar Artisans benefit from the considerable knowledge of Ian Robinson and Bruce Keir, who in a previous incarnation were responsible for some of the best amps and pedals to come out of the Marshall factory in recent years.

The Artisan A15 boasts the kind of build quality we've become used to seeing from some of the top names in boutique amp contruction. The joinery standard is clean and neat, with a nice consistency to the large radius dovetailed corners.

Look closer at that rich ruby red vinyl covering and try to find the cuts on the corners; there aren't any, just a couple of small triangular infill pieces on the tight inside corners surrounding the control panels. Apart from that, the vinyl is applied so well it looks almost as if it's been sprayed on.

The electronics live inside an exceptionally clean chrome-plated chassis. It's tough, heavy-gauge steel and it needs to be because the transformers are substantial. The rest of the electrical components live on a long turret board that runs almost the full length of the chassis.

Turret board construction is typical of many early British amps; you start with a long strip of insulating material, such as Paxolin or GRP, and drill holes in it along both edges. Into these holes you hammer the turrets - small nickel silver posts about 10mm high. The components are attached to the turrets, with link wires between to make up whatever circuit you need. It's relatively easy to service and, if done properly, very robust.

The standard of wiring on the A15 is exceptionally high - the turret board itself is fixed to the chassis with metal stand-off bolts, all the components have two or more turns around each turret post, and all the wires are properly laced together and pushed into the chassis corners in order to minimise mains hum.

It's also worth pointing out that the soldering is remarkably consistent. The benchmarks for this type of construction have always been the original Hiwatt heads designed by Dave Reeves and wired to military specification by Harry Joyce. The Artisan A15 combo easily meets that standard.

"I honestly believe that at the moment, these are the best-made amps of their type in the world, at any price," says Ian Robinson. "The folks at the factory in Korea are perfectionists just like us when it comes to getting all the details right."

Designed primarily to appeal to purists, the amp has a relatively straightforward control layout with a few boutique twists. There are two very different dual input channels, each with a volume and tone control. Channel 1 is based on the classic Marshall 1974, while the EF86-powered Channel 2 is inspired by early Fender Champ tones.

A mode control switch allows you to run the output stage in either 15 watts push-pull Class A, or five watts single-ended Class A. Also, the dual input arrangement means you can link both channels together using a short patch lead, adding a lot of flexibility from a deceptively simple layout.

Given the spec and build quality, tonal expectations are high and we aren't disappointed: tested with a standard Fender Strat and a PRS McCarty, the A15 delivers sweet cleans from Channel 2 at lower levels, translating into intricate nuances of harmonic distortion as you push the volume.

Channel 1 offers a more aggressive tonality, with upper mid-range emphasis and punch, especially with a good humbucker supplying the juice. Linking both channels changes things dramatically - all of a sudden the volume controls become tone controls too, as you mix each channel's level to suit.

Used in single-ended Class A mode, the sound warms up and overdrives much easier at lower volume, with a softer and more rounded quality when pushed hard. Happily, noise is practically non-existent.

Best suited to vintage blues, rock, country or pop sounds, there's a lot of tonal flexibility from the A15, and the quality of that tone is simply outstanding. However, you need to run it quite loud to get it, so those looking to drive the amp at home would be best advised to think about utilising either an attenuator or quality overdrive pedal.