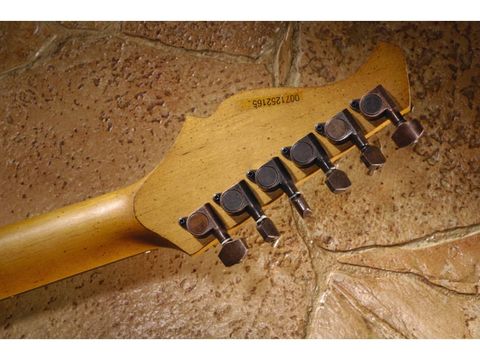 Unique in looks it plays really well. A few tweaks, better pickups and you could have a really good guitar on your hands for very little money.

The Eldorado is a fairly low-key offering from Chinese manufacturer AXL, especially when it's compared with its sibling the SRO, possessing a similar distressed look but with a slightly more broken-in feel.

The 'C'-profile neck and medium fret wire make for a very playable guitar; couple that with a very presentable out-of-the-box set-up and we're off to a decent start.

The two EMG-designed single-coil pickups are set in an aged off-white plastic scratchplate and selected with a Gibson-style three-way selector switch, with master volume and tone controls.
An off-white distressed finish has been employed on our example - to picture how this finish looks and feels, imagine a guitar that's been bought in the 50s and then left in a humid barn for all that time.

Little patches of wear have been strategically eroded around the edges of the guitar. These are not particularly related to a guitar that's been relic'd to reflect player wear but one that's been left out in the elements.

A string-through anodised hard-tail bridge and enclosed-style antiqued tuners cap it off.

This guitar, although essentially based on Fender's second son, is an original take on a classic design. Although not a wholly original concept, they do come in at approximately 20 times cheaper than a Trussart - now there's some perspective.

The Eldorado - after a string change from what feels like 0.008s to 0.010s - is nice enough when played acoustically.

The simple settings give us a bridge single-coil, which is a little thin sounding. It's lacking the bite and attitude of a good Telecaster bridge single-coil but it's good enough, even though we'd like a little more zest. As it stands it handles rhythmic duties fairly well.

The middle combination gets a little more interesting - a stronger tone, Telecaster-esque in character - and the neck pickup serves up some warmer, meatier tones with an underlying twang - to our ears, the most musical sounding of all of the selections.

It seems that even with extremely cost-effective, mass-produced Chinese instruments, there's still plenty of scope for stylistic tinkering. In fact you could probably con your less-informed mates that this Badwater guitar costs a packet.

There's no getting away from the fact that it's built to that price, though. It really would benefit from better strings and better pickups.

If you were to install some Wilkinson or Kent Armstrong retrofits here, and do the advised tweaks, you'd have something that looks, plays and sounds well beyond that bordering-on-silly pricetag.