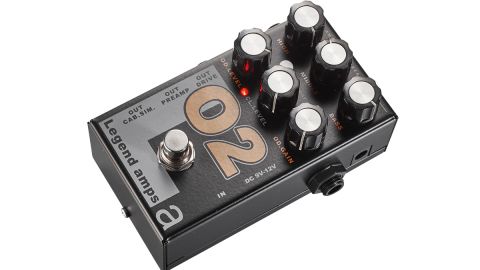 The O2 is packed full of glorious rock tones. Fantastic.

Yeah, it looks like a fuzz box but the O2 Legend Amps is actually a two-channel preamp.

It has three outputs [cab simulator, preamp and drive] which you can run solo or simultaneously.

You can plug the it directly into your amplifier, a live mixing or studio recording desk, or a computer sound card to provide classic rock sounds, using the Orange AD30 as a reference.

It also operates as a clean channel; in the clean mode you get a volume control and a boost switch, the latter fattening up the tone when it's engaged. Whack on the overdrive and you're in late 60s, early 70s rock territory - think Free, Led Zep and AC/DC.