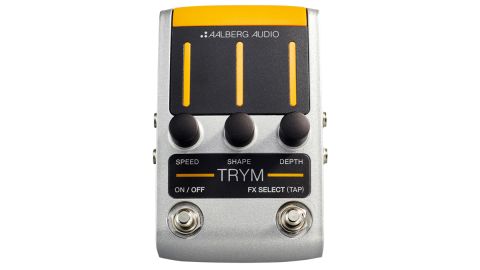 Named after the chap who stole Thor's hammer, the TRYM is a tremolo pedal with standard speed and depth controls.

It also has a Shape knob that morphs between sine wave and square wave to change the tremolo waveform.

This is a nice-sounding pulsing tremolo and the shape-changing - although veering toward a harder-edged trem - never gets into that abrupt on/off sequenced sound.

It's musical tremolo with a practical range of depth and speed, which can also be set using the FX Select footswitch for tap tempo. Among the four in/out configurations, there's a stereo panning option if you want it.

Scandinavian prices can be high and it's perhaps inevitable that a small company in Norway would charge top dollar for its products.

However, we can't help feeling that, unless the wireless control is a must-have, you may find better value elsewhere.