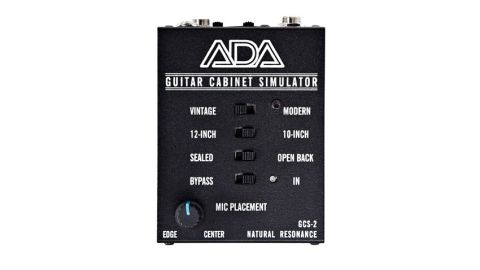 An inexpensive box that's practical in several different scenarios, and can recreate the sound of a range of guitar speaker cabinets.

The A/DA GCS-2 is a guitar cabinet simulator and DI box that uses a purely analogue circuit design. So, why would you want to simulate a guitar cabinet? Well, several reasons spring to mind, notably in live performance…

If, for any reason, you can't or don't want to use speaker cabinets on stage, a speaker simulator connected from your pedalboard can supply a signal that's sonically close to the sound of a mic'd cab to the front-of-house sound system and the onstage monitors.

Or you may be using an amp on stage and want to send an unadulterated signal rather than one from a mic'd cabinet, perhaps for a consistent signal through in-ear monitors. This can be done by taking the signal from an amp's preamp output.

Another scenario may be for recording, where it's not possible to mic up a speaker cab - a speaker simulator could be fed from an amp, from a dedicated guitar preamp (such as A/DA's own APP-1), or from an overdrive or distortion pedal. Furthermore, a guitar through an amp that's double-tracked with a microphone and a speaker simulator will give more options when mixing.

The cabinet simulator on test is a compact stompbox-sized unit with connections round the back and four two-way switches plus a single knob on the top surface. The unit takes an input through a standard jack, while there are outputs on XLR and jack for the speaker-simulated signal plus a Pass Thru output that can send a split of the input signal directly to your amp.

There are several options for creating the type of cabinet sound that you want. You have a choice of vintage or modern speaker: vintage represents an Alnico magnet-based model like an early Jensen, while modern is based on a ceramic model like a Celestion Greenback or an Eminence.

The second choice is for a 10- or 12-inch speaker and the tonal response that implies. You can also select an open-back or sealed (closed-back) cabinet. The final tweak comes courtesy of a rotary knob simulating mic placement in front of a speaker, running from edge to centre.

Our first test of the GCS-2 was to do some recording using just an overdrive pedal. With the GCS-2 bypassed, the sound was the wasp-in-a-jam-jar buzzfest you'd expect when connecting a pedal direct to a mixing desk. But with the GCS-2 switched in, the difference was truly remarkable, with the circuitry completely taming the top end and sounding very close to a mic'd speaker cab.

A/DA says that its Natural Resonance Response technology replicates the low-frequency natural resonance of a guitar speaker cabinet at loud volumes, and the sealed cabinet setting does seem to nail that extra low-end projection typical of a 4x12 cab, which isn't there in the open-back.

Once you've selected the combination that works best for you, it's time for the mic placement knob to do the final adjustments. It does a really good job of reproducing the sonic variation that placing the mic at different points across the speaker's axis makes, with a full treble response at the centre that decreases as you move towards the edge.

If there is one thing to note with the GCS-2, it's that it doesn't feature a power soak/ load box, so you can't connect it to a valve amp's speaker output (there are other options such as the Palmer PDI-03 if you want to do that), but for all of the roles mentioned earlier it does a great job. In fact, for a small outlay, the GCS-2 is one very useful piece of gear. It can provide plenty of variation on the mic'd cab sound without a microphone in sight.