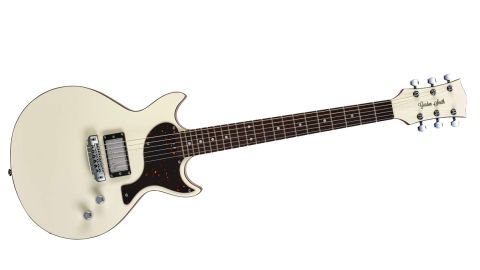 The GS1000 packs a little oomph that elevates it into boutique territory at a far from boutique price.

You could easily dismiss Gordon Smith as a lesser, UK-made Gibson.

They share plenty in style and the GS1 - a sort of ‘Les Paul Jr meets Melody Maker’ - looks like it could have rolled off that Kalamazoo production line sometime during the 1960s. Back in the day, before new owners Auden took over the brand and when there was still a hyphen between Gordon and Smith, the numerous idiosyncrasies of GS founder John Smith often rose to the surface. But now, under the new manufacturing team, those seem to have been pared back, giving the impression of a more mainstream build.

Yet whichever view you take, do not underestimate the potential of Gordon Smith, not least here in this built-for-stock Special Edition guitar. The boutique-y GS1000 comes in at £999; not quite a Korean-made price, but great value for a British build of this quality. Indeed, value for money is a key reason why you might want to test the modern Gordon Smith recipe.

Built around the ‘correct’ Gibson scale of 625.5mm (which John Smith had measured and always used), this model features a double-cut Les Paul outline and is made in the thicker of two styles offered by GSG - the thin body version being just 36mm in depth. Here, the GS1000’s body is a shade over 44mm and is a thick slab of one-piece Brazilian cedar respectively.

There are no comfort contours to the body: our GS1000 has tasteful tortoiseshell plastic around the body’s top edge, fingerboard and headstock and a Thick neck. Again, like the bodies, one-piece stock (quarter sawn) appears to be used. There aren’t even any headstock widening wings. The GS1000 again uses Brazilian cedar.

It also sports a rosewood fingerboard with a 305mm radius and simple dot inlays with the medium jumbo wire, which measures 2.57mm wide with a height of approximately 1.24mm. There’s a visible wheel-type adjustment for the truss rod at the end of the neck - a new feature for the Auden era - along with a more conventional two-way truss rod.

Another new addition is the ‘tone pocket’. “I can’t tell you about that,” laughs Doug. “It’s something our team here has worked on and we believe it results in more contact between the neck and body at the point of the joint. It’s quite small if you look at it from a length point of view, but once you get inside the guitar, there is a flange that widens out to give more contact between the body and the neck beyond what you can see.”

When it comes to the bridge, the GS1000 has a sophisticated option in the form of the fully intonatable Gotoh 510.

This model uses a modern version of John Smith’s humbucking design. The GS1000’s pickup is in a nickel-plated cover. The controls also retain a twist or two from John Smith - the coil-split function is on the volume control (which voices the slug coil) not the more usual tone control, and each pickup circuit uses a pair of 0.022 microfarad tone capacitors and a pair of 0.002 microfarad ‘treble bleed’ caps that have been slightly tweaked compared to the pre-Auden wiring (certainly according to an original GSG wiring diagram we have).

Weight-wise, it feels business-like but are not overly heavy. There’s an impressive acoustic ring and resonance. However, with the heel-placed upper-strap button, the guitar does tend to tip forward a little, in a similar way to a Gibson SG.

The single-pickup GS1000 packs a classy sound - presumably due to the materials used and that bridge. The guitar seems to capture plenty of depth in both pickup modes. It’s a refined piece and, if we’re honest, sounds like it too.

On one hand, you might simply want to swap out the pickups of this guitar and fit a more conventional control circuit - we’re sure it would sound superb.

If we step back from the heritage of the UK’s longest-running production guitar company for a moment and just consider this simply as a new guitar, one quality stands out proudly above all other virtues: excellent value for money.

Factor in the one-piece wood stock, smart build, good components and the unique and highly useable voicing and you have a proposition that’s hard to ignore.

The GS1000 packs a little oomph that elevates it into boutique territory at a far from boutique price. We’d strongly recommend you give this revitalised brand serious consideration.