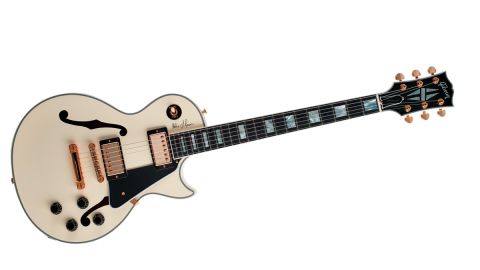 A signature model full of character at an appealing price.

Alex Lifeson’s latest signature uses the iconography of the Les Paul Custom but in semi-hollow ES LP style and is limited to a run of 200 pieces.

While it’s hard to second guess the price-points and style of Gibson’s often forward-looking USA production range, the Memphis division output has never failed to impress us with an eye firmly on the past.

Yet this guitar is not just about replicating the past: along with new design, Memphis is surprisingly cutting-edge, too, employing ‘thermally engineered’ woods - aka torrefication, a process for ‘ageing’ woods and a growing trend for both acoustic and electric makers.

Earlier this year, division head Mike Voltz indicated Memphis’s plans to use more of the same, suggesting torrefied mahogany for necks, for example, once the production process has been sorted, due to the more brittle nature of the timber after its heat treatment.

Ironically, this modernism is being used to try to nail more closely the weights and sonic response of older vintage pieces. Gibson’s certainly created a more vintage-like appearance with its VOS treatment where both the nitro-cellulose gloss finish is cut back to a lower-gloss lustre and hardware is aged - not distressed - to match. It’s not meant to fool anyone into thinking this is a real old guitar, but it certainly doesn’t look like those box-fresh ‘don’t touch me’ high-gloss pieces, either.

The Lifeson does have a standard gloss with shiny gold-plated parts, but still looks slightly old with a creamy hue (we suspect it will yellow more with time and use).

Construction-wise, the Lifeson uses a fairly emancipated centre block made from that torrefied mahogany and spruce bracing.

The Lifeson is slimmer than the recently-reviewed Freddie King and Tamio Okuda Gibsons by a whisker and, in lower positions, feels less rounded with more tapered shoulders.

Strapped on, the very slightly neck-heavy ES-Les Paul feels quite unique, albeit it in a good way. It feels like a proper guitar, for sure. It also feels like an old guitar that has been played. ‘Character’ is the keyword here; the sounds and feel created by this instrument that takes us back in time.

It’s not cheap, and there’s healthy competition from numerous brands, but there’s something in the Memphis water that makes its guitars rather unique with their old-school build that seems slightly time-warped.