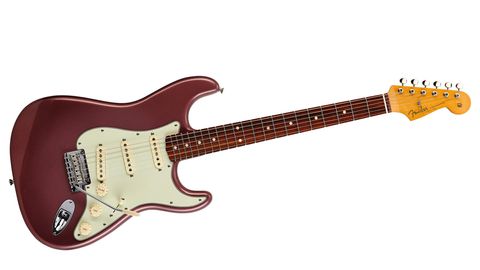 A gateway to the world of vintage.

In recent years Fender has refreshed, refocused and renamed virtually all of its key series.

The creation of the American Professional range, which gave the long-running American Standards a considerable reboot, was one of the most inspired we’ve seen. Then it was the turn of the American Vintage guitars; they became the decade-specific American Originals - and that’s the style we have here. The new Mexican-made Vintera series amalgamates the previous Classic and Classic Player ranges into one, creating, says Fender, “a line of vintage-inspired models that embody a period-specific vibe. Each model delivers the authentic look and feel of its era, as well as decade-specific tones from the 50s, 60s and 70s.”

The reorganised range comprises seven Telecasters, five Stratocasters, a pair of both Jazzmasters and Jaguars, and a single Mustang. Notably absent are any left-hand models. The Classic series replacements are the standard vintage-spec models - all 21 frets with 184mm (7.25-inch) fingerboard radius – while the Modified models replace certain Classic Players, vintage hot-rods if you like. These reflect numerous player mods: improved hardware, a flatter fingerboard radius, bigger frets, hotter pickups and some switching additions.

Price-wise, we kick off at £749 for the vintage models, adding £100 for the Modified models, while the Thinline Tele unsurprisingly tops the range at £999. All include gigbags. Either side of these are the Mexican Player series (previously the Standards), priced between £599 and £729, excluding gigbag, and the start-up American Performer series, which refreshed the American Specials, with a tighter price span of £999 to £1,049, including a gigbag.

So, with considerable choice, let’s take a closer look at this (rather familiar-looking) Vintera Modified model...

Offered in vintage and Modified versions, our 60s-era Strat replaces the historical rosewood fingerboard with pau ferro. This Modified model is essentially the same as the previous Classic Player version with a Modern C profile neck (the vintage model has a mid-60s C), although the 305mm (12-inch) fingerboard radius of that previous model has been reined back to 241mm (9.5 inches).

Both new versions use vintage-style 60s single coils; our modded versions are classed as ‘hot’. On both we have a tone control for the neck and middle (tone 1) and the bridge (tone 2). This Modified version also uses an S-1 switch, adding the neck pickup to position 1 (bridge) and position 2 (bridge and middle). Here, the vibratos also differ: from the six-saddle vintage-style of the vintage version to the ‘improved’ two-post style of our modded model.

The vintage model comes in three colours, 3-Colour Sunburst, Surf Green and Ice Blue Metallic; our Modified model is available in just two - the Burgundy Mist Metallic we have here and the returning Olympic White.

If the Classics and Classic Players have rightfully achieved a reputation for affordable quality, it’s no different here. It’s pretty tidy. From the weight to the fretwork - which uses medium jumbo wire, “the perfect marriage between small vintage frets and modern jumbo,” says Fender - there is a consistency and ‘perfectly good enough’ level to this guitar.

There’s a strong NOS vibe, too: the finish and hardware gleam and shine, although it has an accurately toned neck finish with silky smooth satin back. Our Strat swaps bright white plastic parts for a three-ply mint green scratchplate and aged white pickup covers and knobs.

This production level does create what many might view as a generic feel that’s less ‘vintage’ than an American Original or certainly a Custom Shop model. But it feels far from cheap and not a million miles away from the American Performers or even Professionals. Our ’60s Strat really would give the latter a run for its money, even though its neck is slightly less deep in higher positions and the fretwire, as we said, is slightly wider and a little lower.

Setup, too, is very good. The Strat’s screw-in arm is a little sloppy in feel (there’s no tension adjustment) unless you screw it in very firmly, and the high E saddle is so close to the pivot post that as you bend the vibrato down it makes contact and pushes the saddle back a little.

As we begin running through the sounds, there really aren’t any surprises - or any sounds we haven’t heard dozens of times before. That said, the Strat has attack to it than a vintage-spec, but retains some bite from the bridge.

Select both pickups in parallel and push down that S-1 switch and it’s far from the thin ‘strangled’ out-of-phase sound we expect: it’s less nasal and adds more bass back to create a very usable alternate mix. But select the series mix and hit the S-1 switch and it really is a strangled thin tone, which might work in a psychedelic funked-out and effected setting, but we’d suspect many might find it unusable.

Our Strat is perhaps slightly stiff sounding, slightly brighter than any of our references and a little bass-light in comparison. It’s not hotter than aTele or Jazzmaster and typically sounds very cultured and refined. While we lack a little woody depth from the neck, both mixes excel: crisp, textured and bouncy, while the solo bridge pickup is slightly smoother in the high-end, probably because of its dedicated tone control. But tonal shade aside, it sounds like a Strat and as we get used to its mettle, it does the job and proves quite the all-rounder. The S-1 switch performs the ‘seven sound’ mod by adding the neck to the bridge pickup for, firstly, a wider Tele-like mix and then all three pickups together. No surprises, but we’re far from disappointed.

A 17-strong guitar range that encompasses eight different Fender models spread over three decades is never going to please everyone in terms of colour choices or specification. And if you’re a left-hander, unfortunately you’ll have been totally ignored here. Although there are some tweaks to the pickup voicings and the look and feel of the toned necks, these are essentially guitars we’ve all seen, played and probably owned and modded, too, over the past couple of decades.

But as your gateway to the world of vintage (and modified vintage) Fender, these guitars are hugely valid, whatever they’re now called. They remain go-to choices for players on a budget and we’d suggest there’s enough refinement and a build quality that’ll surprise many sniffier punters. As ever, though, deciding which one you might want to add to your own arsenal is probably the biggest question we all have. Three down, 14 to go...