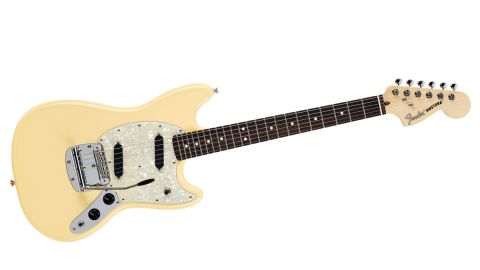 Here, we have the newest version of the much-loved Mustang, a guitar that was never intended to be anything more than a decent student guitar.

This American Performer model is built around an offset alder chassis with a hard-wearing gloss polyurethane finish. The maple necks are bolt-on, of course, and while they share a comfortable ‘Modern C’ profile, 241mm (9.5-inch) radius and satin polyurethane coating, their scale lengths differ. The Mustang is short-scale at 610mm (24 inches). It has 22 jumbo frets (vintage and reissue models only have 21) and a simple wiring loom. You get a master volume, ‘Greasebucket’ tone and a three-way pickup selector toggle switch.

The American Performer Mustang has the classic ’65-style slab body. Fender didn’t add body contours to the Mustang until 1969, along with ‘competition stripe’ graphics. The new model comes loaded with the same Marmite ‘Dynamic’ vibrato fitted on those vintage ’Stangs. The one concession to modernity is a plastic sleeve in the vibrato armhole to keep the wiggle stick from wandering off when you need to grab it. Not everyone loves the ‘Dynamic’. It can suffer from tuning problems if not set up correctly. That’s why Kurt Cobain famously had his Mustangs tweaked into hardtails. We actually like it. Tuning stability, on this guitar at least, is great, and the vibrato has a good range even if it’s happiest providing a little shimmer.

The ‘Modern C’ profile is a great one-size-fits-all option. It hits that magic sweet spot between fat and thin. Most would never consider the Mustang as a lead guitar, but the big frets and modern radius ’board makes it as shreddable as any other guitar.

It comes strung with 0.009 to 0.046-gauge strings and these feel like wet spaghetti on the Mustang. You can practically pull off David Gilmour-style overbends on this guitar without any real effort. We’d suggest fitting a heavier set: 11s, 12s... or, at the very least, a set of 10s.

We like the satin polyurethane finish on the necks. Fender has been using this since the American Standard stuff landed back in the 80s. Yes, we’ll always have a soft spot for the gloss nitro finish on old-school ’Stangs, but there’s no denying the satin finish offers way less friction.

The ‘Sounds’ section of this review would be way longer if the American Performer Mustang had the control layouts of its ancestors. Allow us to mansplain. Your classic and reissue Mustang features a pair of three-way pickup selector slider switches. These allow the single coils to be switched off, and run in parallel and out of phase. Not bad when you consider this model was designed for students. This Mustang is running a much simpler setup.

As we expected, the Mustang offers less twang and sustain than its longer-necked brother, the Jazzmaster. It’s typically typecast as a strummer’s guitar, but there’s more to it than that. Its single coils definitely work at their best with effects. A touch of overdrive, some reverb and delay - that all works wonders. Combining the pickups actually works great for some sweet Curtis Mayfield and Hendrix doublestops. The shorter scale adds some fluffiness to the bottom-end that would be a problem for other guitars. Here, that slight lack of definition comes across as extra warmth.

Fender has really shown its offset throwbacks some love in the past few years what with its Mexican-made hardtail Mustangs, and the recently released Vintera Jazzmasters, Jaguars and Mustangs. These American Performer versions aren’t quite as cute as the vintage-spec models, but they are easier to play. After all, it’s the mad design quirks that make the original ’Stangs so adorable, but not everyone wants that stuff.

In the end, there’s enough vintage DNA in this model to make it cool, balanced with a level of modern build quality and playability to make them accessible to all types of player. A guitar for everyone, if you will. As it happens, that’s all Leo Fender set out to achieve in the first place.